Atlanta,GA: Swami Adhyatmananda’s stay in Atlanta from June 25 to July 6 was a hectic one that included many programs in and around the city, averaging 3-4 programs every day.

People from diverse cultures and different back grounds had the opportunity to hear and interact with Swamiji on a one-on-one basis.  Swamiji addressed social workers, community leaders, businessmen, professionals, students and spiritual seekers. 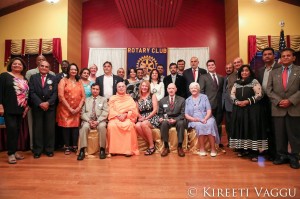 Swamiji arrived inAtlantaon the evening of June 25 and immediately drove to give a key note address at the installation ceremony of new office bearers of Rotary club of Emory Druid Hills (RCEDH) which was held at the Palace Restaurant. His words of wisdom on building peace across nations, meeting basic human needs, leadership , attendance and service above self was outstanding. It left the Rotarians enriched from his talk. Alicia Michaels, District 6900 Governor, Rtn Barry Smith, Past district Governor and Rtn. Ben Hunter, Assistant District Governor were present among many community leaders.

IPN: Secrets of success in business and professional life: 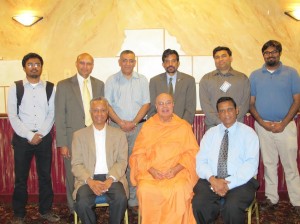 Swamiji with the organizers of IPN.

On June 26, Swamiji addressed a group of businessmen and professionals in Indian Professionals Network (IPN) meeting at Ashiana banquette hall in Norcross. The attendance was impressive despite the fact of another important event was held in the city where Consul General of India in Atlanta hosted a reception in honor of India’s Health Minister Dr Harsh Vardan. Swamiji spoke about the secret of success in professional and business life.Swamiji’s inspirational words will leave long lasting effects on the audience. In His words, “No profession is possible unless and until you know the root and root in two ends. If the root is not strong, the end cannot be reached. Have a strong foundation. If you want to propitiate in your business, never lose a chance to do business. Working hard is a must.  As Swami Vivekananda said struggle, struggle, struggle. Struggle is sine qua none of life. Success is possible with seriousness and sincerity. Be true to yourself. Identify yourself with business, profession. Don’t keep yourself separate. Thinking and planning is essential. In case, if you flourish in the profession you should be kind hearted and soft hearted and have sweet tongue. Don’t be harsh. Smile, quality and hard work are the secret of successful business. Plan and execute with love and affection. Choose whatever you want, small or big. Business is not some one’s fore father’s property. It is your property. What is needed is courage, seriousness, effort, hard work and loyalty.  That will come only when you love your profession. Hard work with all sincerity, loyalty seriousness and love for the work magnify your profession. Never take the profession easy. Exhaust, alert, strive and struggle. Sowing the seed is not enough. You have to nurture it patiently and be vigilant. Don’t lose charm. Anything you want to do, physical fitness is a must. Don’t agitate, Don’t disturb yourself. Don’t keep your ego up. Be kind, humble, noble and simple. Whatever you are supposed to do, you do that at that time only. Keep in mind ‘DIN’, do it now and ‘KIV’, keep it in view.”

To a question on spiritualization of professional life, Swamiji said anything you do think of god. Any thing you do eating, drinking or walking, you do whatever you are doing. At the same time keep your mind in Him only, 100% awareness of His existence. Your profession turns into spiritual.

Earlier, Dr. Narsi Narasimhan welcomed the audience. He said IPN Atlanta was founded in 1993. After holding monthly meetings for more than 12 years, it was put on hold since there are other excellent professional networking opportunities offered inAtlantaby GIACC, NetIP-Atlanta and TiE-Atlanta. To fill a void in the community, we are back.

IPN does not have membership dues and everyone is welcome. Each monthly meeting is organized by a different volunteer leader.

Shiv Aggarwal and Dr. Ravi Sarma introduced Swamiji. Sarma said that lifelong gift that Swamiji has given to all of us is his unconditional love and affection. That’s what I go away every time I see Swamiji. If you ask me what he told on scriptures that day, I may not be able to remember. But I think of Swamiji, I think of his smile, genuine love and affection. 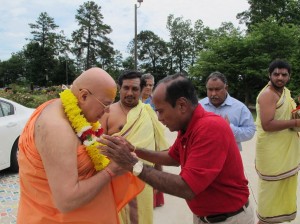 Swamiji being received by Narender Reddy, President of Hindu temple of Atlanta, Riverdale.

As always, Swamiji was received at HindutempleofAtlanta, Riverdale with all temple honors, purna Kumbham while musical instruments are being played. After having the darshan of temple deities, Swamiji addressed the gathering on Sri Vishnu Sahasranama. Swamiji has taken the starting word ‘Viswam’ from Sri Vishnu Sahasranama and explained.  Sri Vishnu Sahasranama starts with one word viswam. Vishwam is the cosmic form of the lord. He is within and without. He is the supreme exist. Swamiji’s detailed explanation of various aspects of viswam with anecdotes impressed many.

Swamiji addressed members of Gujarati Samaj. The attendance was impressive. Swamiji felicitated three senior couples who are above 80 year old with garlands. Swamiji exhorted members to teach their children their culture and language at home. He told audience that they are Indians first and then Gujarati. Swamiji commended Gujarati Samaj for the good work they have been doing and encouraged them to work united to carry forward the Samaj projects. He asked members not to keep their ego up and respect each other. 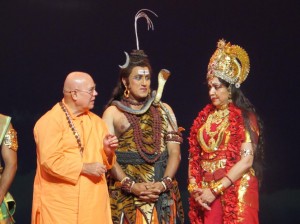 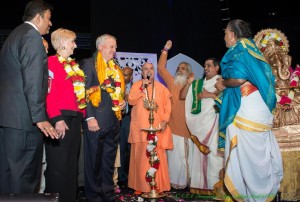 Swamiji had a brief meeting with Dr HarshVardhan, Minister of Health, Government of India. 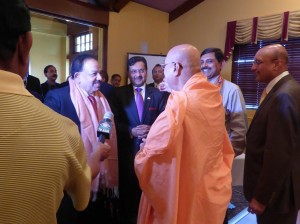 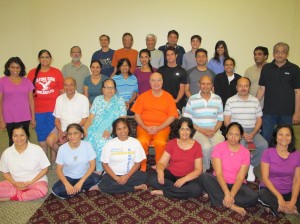 Swamiji with some of the participants of Yoga classes