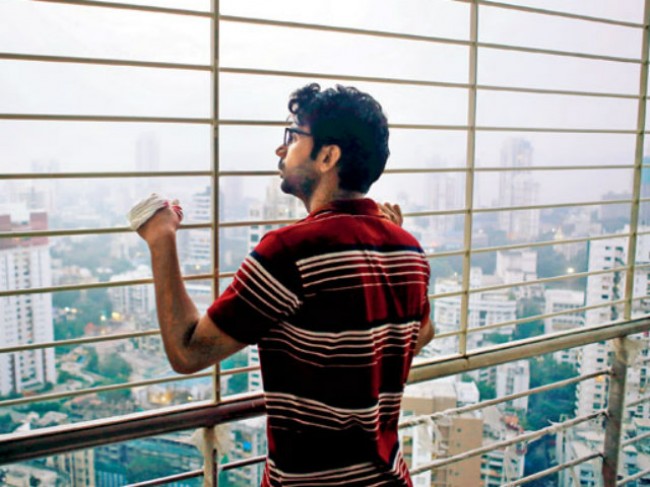 Director Vikramaditya Motwane’s film “Trapped” is a minimalist survival film. It is the compelling tale of a man trapped and stranded on the 35th floor of a newly constructed, unoccupied building, in the heart of Mumbai.

The film begins on an unassuming note with Shaurya, a shy and timid guy, falling in love with his colleague, Noorie. In his bid to start a new life with her, he shifts from a shared accommodation to a flat in one of the unoccupied skyscrapers. That he is an illegal tenant, is a separate issue.

Designed to cater to an intelligent audience, the film has all the trappings of this genre. It is well made and engaging, but nevertheless, seems contrived simply because the entire setting is far from subtle. What starts of like a realistic film ends up like a fabricated drama — on the face, breathlessly rushed and manufactured.

This is evident, as the director has taken enough measures to ensure the mise-en-scene is perfect. In one of the earlier scenes when Shaurya is leaving his shared accommodation, the television set is on in the background and the host of a television programme states, “a… and the great survive”. This predictably lays the foundation for the events to follow.

Also, what makes “Trapped” seem utterly fabricated is that the story takes place sometime in Mumbai and the time in the film universe seems timeless. So the sudden downpour that enables Shaurya to fill his refrigerator with water seems like deus ex-machina for the plot.

Also, the thrilling factors are trimmed, especially when Shaurya escapes from the flat by scaling down the grills.

The film drags. There are moments of pure agony that make you squirm, waiting for the torturous moments to tide-away. Interestingly, these moments along with the scenes when the tables are turned with Shaurya being a timid guy to a hunter, are probably the best flashes of the film.

As Shaurya, this is Rajkummar Rao’s canvas and yet it is not one of his best performances. An excellent actor, he is stifled with the limitation of the script. He appears dim-witted and portrays a gamut of emotions that are blatantly cheerless, gloomy and far from being intelligent. He excels in being frantic, anxiety driven and desperate. But the desperation comes across as a half-hearted attempt, probably because of the script.

Geetanjali Thapa as Noorie is natural and sincere.

On the production front too, with a simplistic approach, the apartment is not congruent to a flat in a newly constructed apartment. And the background score fluctuates from being realistic to over-the-top.

Overall, the film makes you feel trapped in the auditorium.