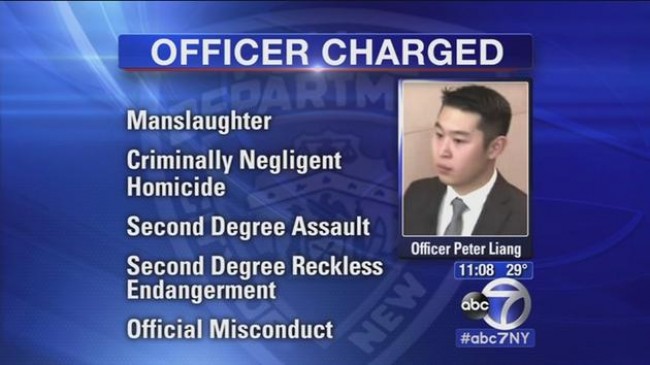 New York, Feb 21 (IANS) Tens of thousands of people rallied in more than 30 US cities to protest the conviction of Peter Liang, a former New York police officer of Chinese descent.

In an effort to show solidarity, a large number of protestors, mostly Chinese Americans, on Saturday joined demonstrations in cities around the nation from Washington DC and New York City to Los Angeles and San Francisco, Xinhua reported.

In New York, 10,000 protestors from all over the metropolitan area converged with placards and banners in hands, chanting slogans like “tragedy, not crime”, “equal justice for all” and “accident is not a felony”.

The organiser of the New York protest — the Coalition of Asian-Americans for Civil Rights — said what actually happened was a tragic accident that claimed two victims, Peter Liang and African American Akai Gurley, but Liang was unfairly made a sacrifice to ease the ever-intensifying friction between the police force and the black communities in the US.

A ricocheted bullet from Liang’s weapon accidentally killed Gurley, an unarmed civilian, when the former New York police officer was patrolling in a housing project in the borough of Brooklyn in late November 2014.

Liang was found guilty of killing Gurley and convicted of second-degree manslaughter by a jury on February 11.

Calling Liang’s conviction “wrongful and selective prosecution”, Yuanfan Sun, one of the volunteers who helped to organise the rally in the DC area, said the conviction was the latest case of making the ethnic minority American a scapegoat to pay for the police brutality that has troubled US society for a long time.

“Liang is not a criminal. Sacrificing Liang is not the correct way to solve the systematic problems. Justice is not served by finding a scapegoat,” said John Chen, president of the New York-based Coalition of Asian-Americans for Civil Rights.

On November 20, 2014, Liang, a 27-year-old “rookie” officer with only a year-and-half on the job, was patrolling on the eighth floor of the Pink Houses with his partner, Shaun Landau, who was also new to the job. Liang had his gun drawn.

In the court hearing, Liang testified that in the pitch-dark stairway, he was startled by a noise. “And the gun just went off after I tensed up.”

The bullet hit the wall before ricocheting and hitting Akai Gurley on a lower level, piercing his heart and liver.

It was minutes later that Liang came to know Gurley was struck and killed. “I was shocked. I was in disbelief that someone was actually hit,” Liang recalled.

Liang is the first policeman from the New York Police Department to be convicted of homicide in the shooting of a civilian since 2005.

Many believe that the manslaughter conviction has been influenced by the enormous pressure on the country’s law enforcement as white police officials have often walked scot-free in similar incidents wherein innocent black civilians were killed, which have triggered massive protests and riots from African-American communities nationwide.

Outside the Cadman Plaza Park, a dozen of “black lives matter” activists also held an opposing protest. They demanded that “killer cops” be jailed, and called for stricter police accountability.

“In New York and all over this country, for a long time, we can point to many even worse instances of police abuse and police murder where the police have gotten off. But that does not make Peter Liang any more innocent,” said protestor Richard Kossally.

Still, supporters of Peter Liang believe that the death of Gurley was purely an accident.

“There should be no conviction,” said President of the New York Veteran Police Association Lou Telano.

“My feeling is that (the guilty verdict of) Peter Liang is just pacifying certain political groups.” Lou said.

Attorney Hugh H. Mo, who served as deputy police commissioner of New York and assistant district attorney in Manhattan, believes that the guilty conviction was affected by the current political climate.

“I think you have to examine Peter Liang’s case in the context of wrong time, wrong place. Within the last year and half, or two years, there has been such a great number of police shootings of the innocent black man. That certainly created a whole issue of police accountability.”

“As we all know after (Eric) Garner and (Michael) Brown, these cases that have galvanized African American community as well as the white community, many African American feel that police had to be held accountable.”

Liang and his partner were fired from the police department right after the conviction. His sentencing is set for April 14.

Although a guilty conviction by a jury is very difficult to overturn, supporters has voiced hope for leniency in Liang’s sentencing.

“What happened on November 20 was a tragedy for both families,” Councilwoman Margaret Chin in Manhattan said in a statement.

“I ask that Judge Chun give the many factors that made that tragedy happen due consideration in the sentencing of Peter Liang.”

“I hope that District Attorney Thompson will say to the sentencing judges that Peter Liang did not intend to kill Akai Gurley to get things right. This is an accident, not a crime,” said Don Lee.