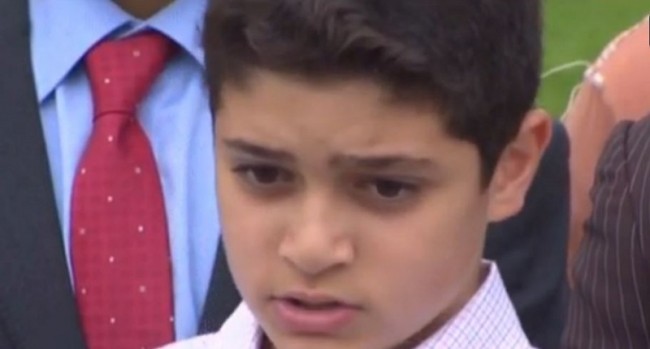 New York, April 3 (IANS) A Houston, TX school teacher accused of calling at class 7 student a terrorist during a class discussion on India has been sent on leave following a demand for her ouster from the student’s family.

The student, Waleed Abushaaban, who is of Middle Eastern descent, stood and gave his input regarding the subject matter.

Waleed Abushaaban was watching a movie with his class at First Colony Middle School in Houston, Texas, when it is claimed his teacher called him the offensive term.

Waleed explained to KHOU that he was laughing at the comedy, Bend It Like Beckham, when the teacher said, ‘I wouldn’t be laughing if I was you’.

Abushaaban left the classroom and called his father.

Standing in agreement with the family, Minister Quanell X has asked for cultural sensitivity training to be implemented and for the removal of that particular teacher.

Earlier, the Abushaaban family demanded that the teacher should be fired, and the school removed the English and Language Arts teacher from the classroom while it investigates the incident. However, Waleed’s family want her permanently dismissed.

“Just because my son is a Muslim doesn’t mean he is a terrorist,” said Malek Abushaaban, Waleed’s father. “He’s an American. He’s as American as anybody else. He was born here… that’s all he knows is how to be an American.”

The Abushaaban family says Waleed will stay enrolled at First Colony Middle School and, in addition to firing the teacher in question, would like religious sensitivity training for both students and teachers.