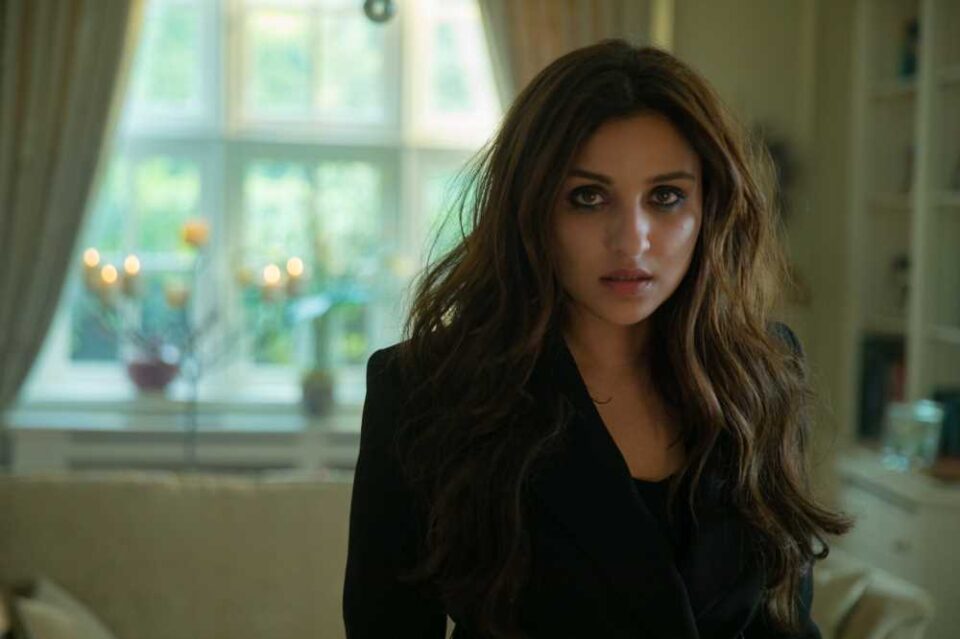 Don’t sit on the edge of your seat as you watch this, you might just fall off dozing.

They needn’t worry about comparisons, there’s scope for none. Ribhu Dasgupta’s Bollywoodised rehash (oops, adaptation) of Paula Hawkins’ bestseller of the same name is too lazy to recreate the slow-burn shock value of the novel and banks on a tangle of too many inconsequential twists.

Hawkins’ written work, an intensely psychological piece, was always a challenge to recreate on screen. A lot of the ‘action’ in the book is actually internalized and it unfolds as thought process of the protagonist. You realized this aspect even while watching the Hollywood adaptation of 2016, starring Emily Blunt. However, Blunt did a great job conveying pain through silences, bringing alive emptiness in her gaze.

Parineeti Chopra on the other hand goes over the top trying to underline the fact that the protagonist, introduced here as Mira Kapoor, is in pain. She shrieks and screams a lot, frowns and glares, and acts as if her character was on substance (okay, she is an alcoholic for most parts).

A brief prelude tells us why Mira ends up this way after we see her start off as an alpha woman in London — a successful lawyer at work, and happily married at home. She has a doting husband, Shekhar (Avinash Tiwary), and they are expecting their first child.

The picture of bliss is shattered when she suffers a miscarriage after an accident. The doctor says the accident has caused anterograde amnesia, Mira becomes an alcoholic and Shekhar moots divorce.

Broken emotionally and psychologically, Mira stops practicing law although she continues ‘going to work’. During her daily trips by train she sees the old house she once shared with Shekhar, now occupied by a happy couple, Nusrat (Aditi Rao Hydari) and Anand (Shamaun Ahmed). Mira finds the resonance of a perfect marriage in Nusrat’s life as she watches her from the window of her train every day. One day, she sees Nusrat in an intimate pose on the balcony, with a man who clearly isn’t her husband.

The first of the film’s major twists comes early on, when Nusrat goes missing and is subsequently found dead in Greenwich forest. A turbaned female officer, simply presented as Inspector Kaur (Kirti Kulhari), investigates the case, and circumstantial evidence seems to point at Mira.

All of that is actually the build-up, meant to gradually engage the viewer before the mystery unravels. In most potboiler thrillers, the build-up at least is absorbing — if anything, for the intrigue it is supposed to raise. The Girl On The Train, sadly, is crushed by weak screen-writing (Ribhu Dasgupta and Viddesh Malandkar), even in its early portions.

For that reason, despite its polished look (Tribhuvan Babu Sadineni’s cinematography deserves mention), the film fails to hold attention. Sluggish editing (Sangeeth Varghese) and a couple of unnecessary songs (music is Sunny and Inder Bawra, and Vipin Patwa) fitted into the narrative don’t help much.

Among the few things that might stay on in your mind is Aditi Rao Hydari’s act as Nusrat, in a brief but impactful portrayal. Most of the cast is strictly average, almost unsure about how to deal with the half-baked characters they get to play out.

Strictly by Bollywood standards of thrillers, and if you haven’t seen the Hollywood film or read the novel, this Hindi remake could seem unusual. But those who have an idea of the original, might just be disappointed.

The girl, her train, and the whole jingbang that goes with it, never quite manage to get on track.