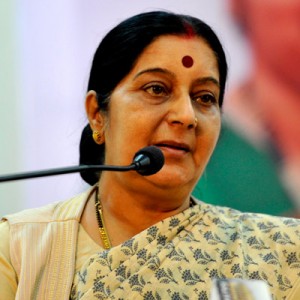 New Delhi, Sep 8 (IANS) India Monday did not rule out a meeting between Prime Minister Narendra Modi and Pakistani premier Nawaz Sharif on the sidelines of UN General Assembly session later this month, with External Affairs Minister Sushma Swaraj saying the government will respond according to the situation that develops.

Talking to media persons here on 100 days’ work of her ministry, Sushma Swaraj said the government will not go to the UNGA session with a predetermined mindset concerning talks with Pakistan.

The minister said there were no full stops in diplomacy. “We well respond as the situation develops. We are not going with a predetermined mindset,” she said in response to a query.

India called off the Foreign Secretary-level talks with Pakistan last month after Islamabad’s high commissioner here Abdul Basit met separatist leaders from Jammu and Kashmir. The talks were scheduled to be the precursor to the bilateral meeting between Modi and Sharif in New York.

Responding to a question concerning cancellation of talks, Sushma Swaraj said there was no flaw in India’s policy concerning Pakistan.

She said the Pakistan envoy had himself called Hurriyat conference members for the meeting.

“What did he achieve by it,” she said, asking if it was wrong to expect that the envoy does not interfere in India’s internal affairs.

Answering a query about ceasefire violations on the Line of Control, Sushma Swaraj said that the director generals, military operations on the two sides will talk when needed.

Answering another query, the minister said that the government will speak only with an elected government in Pakistan.

Sushma Swaraj also said that Pakistan’s response to Modi’s offer of help for flood-victims in Pakistan-administered Kashmir was good.

Modi, who visited flood-affected regions of Jammu and Kashmir Sunday, had written to Sharif offering assistance in relief efforts. Pakistan also expressed its sadness over loss of life in Kashmir and offered help.

The First Naxal: An Authorized Biography of Kanu Sanyal