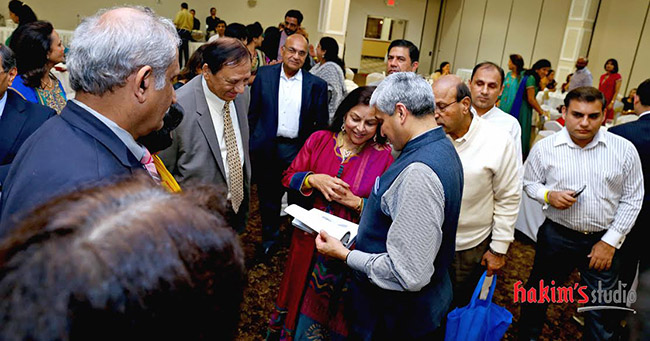 Swarup, who rose to international fame after his debut novel ‘Q & A’ was adapted into the Oscar-winning movie, ‘Slumdog Millionaire’, was in Atlanta as keynote speaker at Emory University’s annual India Week. On March 19, Swarup addressed a gathering of professionals at the Indian Professionals Network (IPN) monthly meet at the Ashiana Restaurant in Global Mall. On March 21, he interacted with community members at a banquet hosted in his honor by Georgia Association of Physicians of Indian Heritage (GAPI) in association with India American Cultural Association (IACA) and Third Eye Dancers. 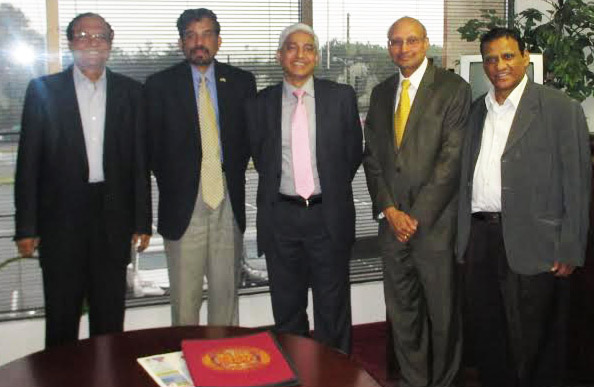 Vikas Swarup (center) with members of the local media and Shiv Aggarwal (2nd from right) before the IPN meet at the Global Mall. Photo by Mustafa Ajmeri.

In his address, Swarup reminisced about his first visit to Atlanta in the 1990s with then Ambassador Siddhartha Shankar Ray to visit Coretta Scott King, and expressed happiness at finally having a consulate in the region.

Swarup then talked about his journey as a writer and took questions from the audience afterwards.

He said his debut novel ‘Q & A’ was written in just two months in London after his wife and kids had gone back to India. “In fact, I wrote the last chapters, around 20,000 words, in just one weekend,” he said.

Read: India is the flavor of the world: An interview with Vikas Swarup

Q & A was written in 2003 and published in 2005. But the movie offer (for Slumdog Millionaire) came in 2004, before the book was even released. The movie, released in 2008, went on to win every major award including the Golden Globes, The BAFTAs and the Oscars. While several changes were made to the original story, Simon Beaufoy, the screenwriter of Slumdog Millionaire had promised to remain faithful to the soul of the novel, Swarup said.

Asked to comment on these differences, Swarup jokingly quipped. “Bengali writer Mani Shankar Mukherjee was asked the same question when his book was made into a movie by Satyajit Ray. He had said: Giving permission for your book to be made into a film is like giving a daughter away in marriage. InIndiayou never speak ill of your son-in-law in public.”

“But the ‘Slumdog Millionaire’ works as a film,” he added on a serious note. “The slum is the backdrop for a compelling human story of courage and determination.”

Swarup also talked about his second novel ‘Six Suspects’ and his third, ‘Accidental Apprentice’, a book written in the voice of a female protagonist.

“I am maturing as a writer with each book,” he said.

Swarup was earlier introduced by Global Mall’s Shiv Aggarwal, who hosted the program. Dr. Narsi Narasimhan and Ravi Ponangi of IPN also spoke at the event.

Addressing a gathering of physicians and other professionals on March 21, Vikas Swarup, whose keynote address was on the topic, “The creative process”, took a moment to appreciate the contributions of the Indian-American community.

“It is wonderful to see how much you are doing forIndiaand to promote Indo-US relations. I truly salute all of you,” he said.

Speaking about creativity, Swarup said, “There are people who believe that the creative process is the prerogative of a few artists; that people are born creative. I believe that creativity exists in all of us. It stays dormant in some people while others have learnt to use it. 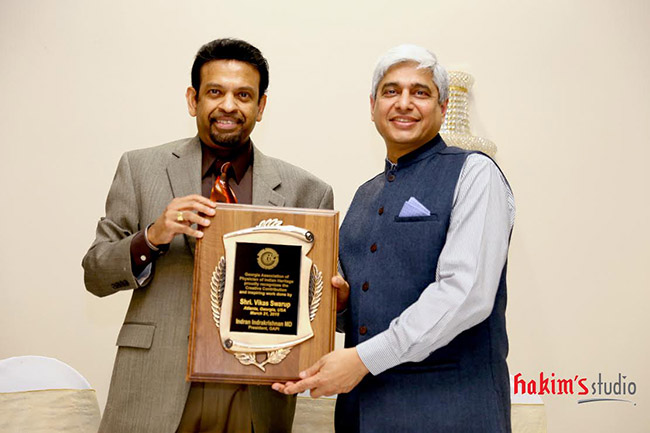 He said the three Cs essential to unlock the potential for creativity and for success, are curiosity, confidence and a computer.

He then elaborated on the three Cs. It took aNewtonto discover gravity, because he was curious, he said. Swarup also spoke about Sugata Mitra’s ‘Hole in the Wall’ experiment which proved that when a computer was placed in a kiosk in a wall in a slum in Delhi, and children were allowed to use it freely, the kids (propelled by their curiosity) taught themselves how to use it without any formal training. The experiment was the inspiration for Swarup’s debut novel ‘Q & A’.

The second C- confidence- is equally important because writing is about taking risks,” Swarup said. “If you believe your grandmother’s story is of interest to people outside your family, take the risk and find out. Try and fail but don’t fail to try.”

The third C, the computer, is an essential research tool, Swarup said. “For Q & A, I was able to research Mumbai and the slums of Dharavi, thanks to google. For the ‘Accidental Apprentice’, I could research ‘khaap panchayats’ and kidney transplants quickly. A poor man with access to the internet has as much information at his disposal as a millionaire with 10,000 books in his library.”

In conclusion Swarup spoke about the element of luck in his own journey. “My books have a familiar strain in them- of ordinary persons thrust into extraordinary situations. Sometimes I feel this is a metaphor for my own life, post the extraordinary success of Q&A. I did not have English literature as my subject. I’ve never been to a creative workshop. I am the luckiest writer in the world.”

Earlier in the evening, Sudarshan Srinivasan of Third Eye Dancers introduced Swarup to the audience. Subash Razdan, in his brief address, reminisced about his friendship with Swarup since their first meeting inAtlantain the year 1993 when theVedicTemplewas launched.

Shivani Gandhi performed a dance medley set to themes from the ‘Slumdog Millionaire’.

GAPI president Dr. Indran Indrakrishnan proposed the vote of thanks and presented a plaque of appreciation to Swarup.