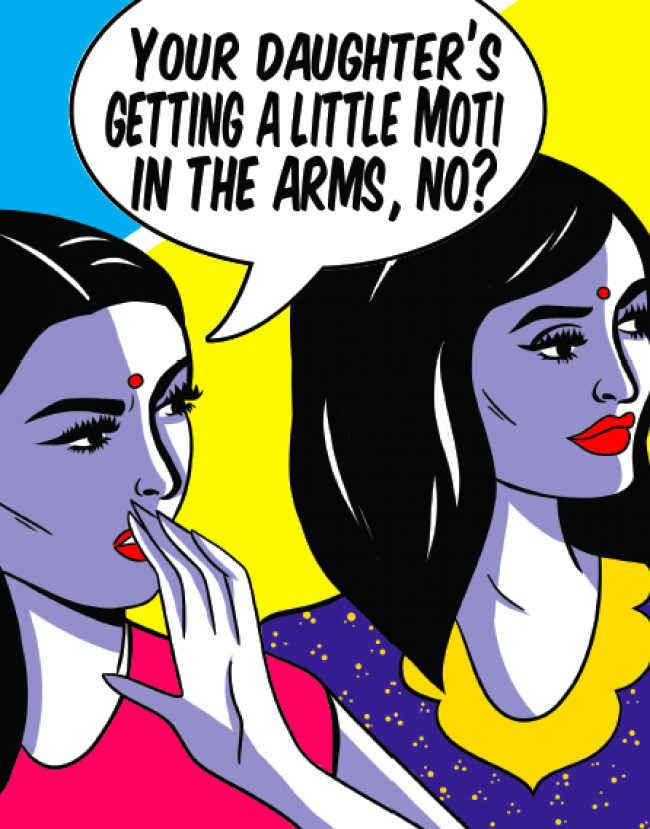 If you’re a brown woman — of any age group, living in any part of the world — you have my sympathies. Because we are burdened with a lot of contradictory expectations. Like being pretty but not sexy, to excel at work but be home on time, be friendly to everybody but not over-friendly. And our biological clock is ticking but sex is taboo.

And unlike our counterparts around the world, who have to face all this from society at large, we, the brown women, see these enforced by a specific breed of people — the Aunties.

“Aunty is a cross-cultural phenomenon that isn’t limited to a family member; she could be a neighbour, a family friend, or just some lady on the bus who wants to throw some casual black magic your way,” writes Pakistani-Canadian pop artist Maria Qamar in the prelude to her debut book “Trust No Aunty”.

Filled with colourful illustrations, the book is flush with information and insights on how to deal with everything that comes with being desi in a foreign land but, most importantly, how to survive the onslaught of Aunties — who are everywhere.

And unlike most stories about the diaspora that have a grim undertone, “Trust No Aunty” addresses these issues in a hilarious way.

Though it basically talks about issues a brown woman faces in the West, everyone can relate to it.

The book traces different kinds of aunties through the life of the writer, who calls herself an aunty-survivor, and has tips on how to outsmart them.

But not all of Qamar’s Aunties are bad. Some are harmless and, wait for it, even cool.

Qamar, known as Hatecopy on Instagram where she is famous for her art that pokes fun at South Asian culture, shares laugh-out-loud anecdotes from her life — like that time she hid a boy in her closet and lived to tell the tale — and how to deal with such situations.

She throws up scenarios all of us are at some point meant to encounter and then adds a rookie move — which you are not supposed to take — and a boss move — the one you should.

From picking up restaurants to go on a date with your white boyfriend where you won’t be caught by any of your Aunties, to recipes for cheap food that’s not noodles, to tricks on how to dodge a chappal, the book is full of tounge-in-cheek advice that will make your life much easier and free of drama.

On the outside, it’s just a book of funny illustrations with funnier advice and sometimes even gets stereotypical but deep down, it’s important.

The book is essentially a survival guide, which tells you how not to lose the plot even though everybody tells you otherwise. It addresses racism, colourism, shadism, classism, patriarchy and everything wrong with society.

And Qamar’s target is not just the desis — she also hits out at whites for cultural appropriation. Like how wearing a bindi for Halloween is not cool.

It’s not a life-changing or live-saving book, but it’s a fun book to pick up on a bad day at work — or life generally — and just laugh at the stupidity of it all.