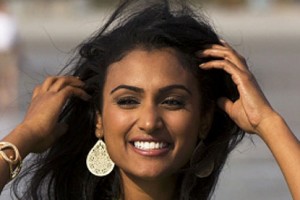 Washington, April 19 (IANS) A Pennsylvania teenager has been suspended for asking the first ever Indian-American Miss America Nina Davuluri to the prom, the annual end of the year dance for high school students.

Patrick Farves, 18, also handed Davuluri a plastic flower after he asked her to the prom Thursday. She smiled – but he was suspended from school after the stunt, New York Daily News reported.

The Central York High School senior was given a three-day suspension for “deliberately defying” school administrators’ requests that he not pop the question after they learned of the planned stunt, the newspaper said.

“At that point in time, it was 10 minutes before the presentation, and I was pretty much set to do it,” he told the York Dispatch.

As he walked away from the stage, in front of the entire student body, Farves did a little jig of happiness.

But the class clown was pulled from the assembly and given three days of in-school suspension for defying the officials who asked him not to pull the prank.

He later apologised, writing a letter to the district’s assistant superintendent that he was honestly sorry for the commotion.

“I do understand why the administration was mad,” he told the Dispatch.

“I don’t want to be the kind of person to try to justify myself … I didn’t intend to disrespect the administration. I can see how it was seen as a slap in the face.”

His suspension sparked a #freepatty Twitter outcry where hundreds of students wrote about the unfairness of the punishment, Daily News said.

Miss America 2014 Nina Davuluri was crowned in September and has a whirlwind tour of visiting schools and events.