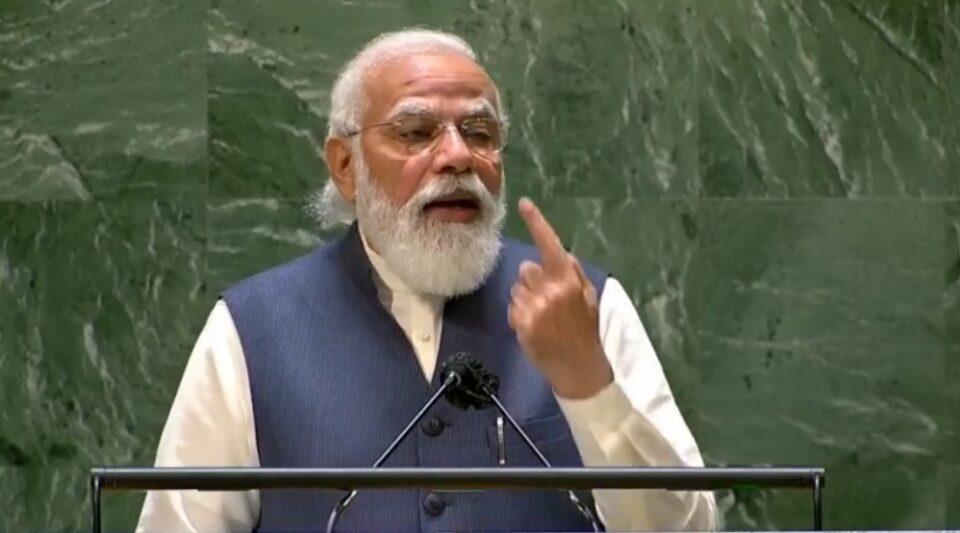 New York, Sep 25 (IANS) In a 22-minute address to the United Nations General Assembly on Saturday, Prime Minister Narendra Modi framed the idea of India’s power in the context of science, technology, culture and problem-solving capability at an “unparalleled” scale.

“When India grows, the world grows. When India reforms, the world transforms. The science and technology based innovations taking place in India can make a big contribution to the world. The scalability of our tech solutions and their cost-effectiveness are both unparalleled,” Modi said within minutes of his address.

Here are 10 highlights from Modi’s speech:

Aspiration: “The strength of our democracy is demonstrated by the fact that a little boy who at one time used to help his father at his tea stall at the railway station is today addressing the United Nations General Assembly for the fourth time, as the Prime Minister of India.”

Democracy: “I will soon have spent 20 years serving my countrymen as head of government. First, as the longest serving Chief Minister of Gujarat and then as the Prime Minister for the last seven years. And I am saying this to you from my own experience. Yes, democracy can deliver. Yes. Democracy has delivered.”

Banking: “During the last seven years, India has brought over 430 million people who were previously unbanked into the banking system. Today, over 360 million people, who earlier could not even imagine this was possible, have insurance coverage as security.”

Healthcare: “By giving over 500 million people the facility of free treatment in hospitals, India has given them access to quality health services. By building 30 million proper homes, India has made homeless families home owners.”

Water Supply: “In India, we are carrying out a very big campaign to ensure that piped, clean water reaches over 170 million homes.”

Science and Tech: “The science and technology based innovations taking place in India can make a big contribution to the world. This scalability of our tech solutions and their cost-effectiveness are both unparalleled. Over 3.5 billion transactions are taking place every month in India through the unified payment interface (UPI).”

Vaccines: “I would like to inform the UNGA that India has developed the world’s first DNA vaccine. And this vaccine can be administered to anyone above the age of 12. Another mRNA vaccine is in the final stages of development.”

Investment Opportunity: “I also extend an invitation to the vaccine manufacturers from across the world. Come, make vaccines in India.”

Terrorism: “Countries with regressive thinking are using terrorism as a political tool. These countries must understand that terrorism is an equally big threat to them. Also, it is absolutely essential to ensure that Afghanistan’s territory is not used to spread terrorism or for terrorist attacks.

“We also need to be alert and ensure that no country tries to take advantage of the delicate situation there, and use it as a tool for their own selfish interests. At this time, the women and children of Afghanistan, the minorities of Afghanistan, need help. And we must fulfil our duty by providing them with this help.”