Students started arriving at Ravindra Bharathi at 7:30 am from different parts of Andhra Pradesh and Telangana regions. Students were accompanied by a parent, or guardian, or teacher.

TAMA Scholarship Project coordinator Seetha Vallurupalli and director of board Mahesh Pawar had a conversation with scholarship recipients as well as their parents and teacher who expressed happiness at TAMA’s initiatives at identifying the district toppers and recognizing them with a scholarship award. They thanked TAMA and TAMA donors for hosting the scholarship event. 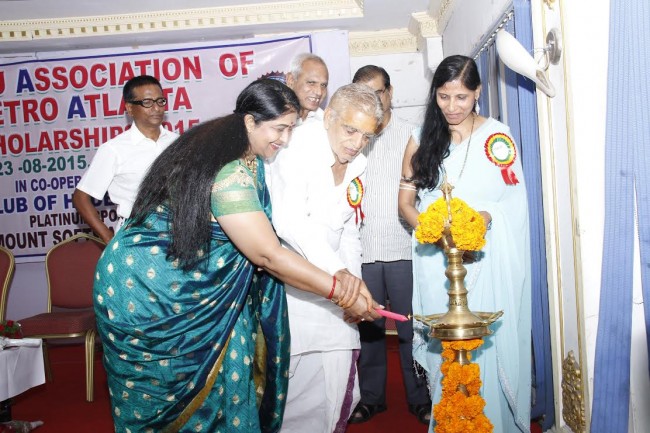 Chittoor district topper Aishwarya said her sister Susmitha was a recipient of the TAMA scholarship in 2012, and she is very happy to receive the scholarship this year because that made her a favorite of her teachers.  T. Sashikala fromWest Godavarisaid she already knew at the beginning of the year that TAMA gives scholarships to district toppers and when she got the results on 20th May receiving a 10 GPA, she was expecting a letter from TAMA. She said her father was a daily wage worker and this money will help her with her college education. Many students expressed a desire to  become TAMA members and give scholarships to others in the future.

Actress Kavitha said if there was an organization like TAMA that helped her when she was a child, she would not have dropped out of school. Ugam Raj Nahar said they were very happy to be a part of the scholarship project. Chukka Ramaiah Garu said Telugu people inAmericaare very generous and want give back to the motherland.