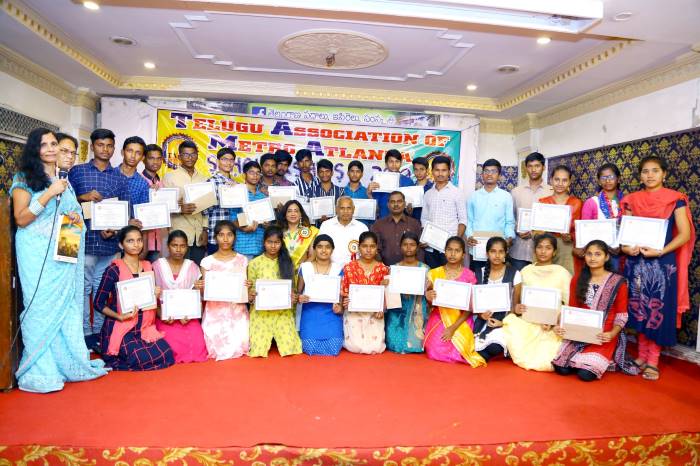 The event was held on November 10th, 2019 at Ravindra Bharathi in Hyderabad, India.

The auditorium was filled with scholarship awardees and their parents, teachers, and school principals.

Program attendees were served with breakfast, followed by an introduction of TAMA by scholarship coordinator, Seetha Vallurupalli. Each awardee got the opportunity to speak for one minute about education and its importance in life.

Ex-Rotary president Sridhar Reddy said his club was proud to be part of the TAMA scholarship event.

In addition to scholarship checks and certificates, students who spoke about education received extra cash for their enthusiasm to express their feelings about education and its use in life.

TAMA has been awarding scholarships to deserving students since 2005, except for the years 2010 and 2011.

This event was possible only because of the generosity of donors who wanted to give back to community, said Vallurupalli.

Prasad Papolu, philanthropist and founding member of Rotary Club of Hyderabad MIdtown has been helping with his paid staff to ensure that the project is executed smoothly in India. MLC Seetharamakirsna helped in obtaining the list of meritorious students in Andhra Pradesh. MLC Sudhakar Reddy helped in obtaining the Telangana merit list.

Vallurupalli thanked Viju Chiluveru for his help in making certificates every year. She also thanked TAMA president Venky Gadde for his help and cooperation.