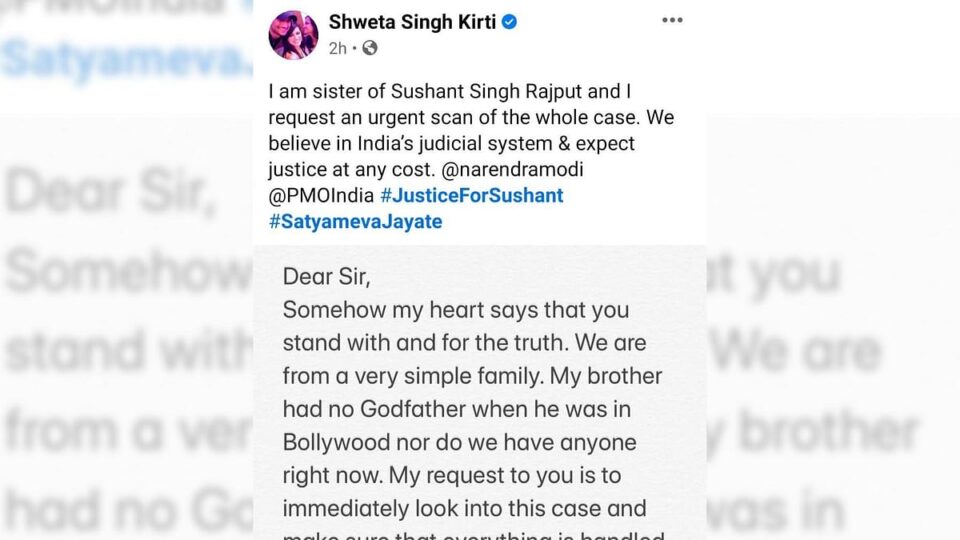 Mumbai, Aug 1 (IANS) Fearing evidence is being tampered with in the ongoing investigation of Sushant Singh Rajput death case, his sister Shweta Singh Kirti has penned an open letter on Saturday morning to Prime Minister Narendra Modi, requesting him to intervene.

In her letter, she has also claimed that Sushant did not have a godfather in Bollywood and similarly his family does not have one in life.

Shweta posted the letter on her verified Facebook account. She wrote: “I am sister of Sushant Singh Rajput and I request an urgent scan of the whole case. We believe in India’s judicial system and expect justice at any cost. @narendramodi @PMOIndia #JusticeForSushant #SatyamevaJayate.”

The letter reads: “Dear sir, Somehow my heart says that you stand with and for the truth. We are from a very simple family. My brother had no godfather when he was in Bollywood nor do we have anyone right now. My request to you is to immediately look into this case and make sure that everything is handled in a sanitized way and no evidences are tampered with. Expecting justice to prevail.”

The open letter to the Prime Minister comes a day after her Facebook post where she shared her late brother’s hand-written plans for himself on a whiteboard, which reveals that the actor was planning to start transcendental meditation from June 29.

The Facebook post on Friday evening shows Sushant was actually planning ahead in life. Shweta shared a photograph of a whiteboard, on which, in Sushant’s handwriting, is a daily to-do list for himself.

The list includes his plans to practice transcendental meditation daily from June 29. Other instructions include “make your bed” after waking up, “read books, watch content movies/series, learn guitar and workout” among other things.

“Bhai’s White Board where he was planning to start his workout and transcendental meditation from 29th June daily. So he was planning ahead. #justiceforsushantsinghrajput,” Shweta had written on Facebook on Friday.

Sushant Singh Rajput was found hanging in his Mumbai residence on June 14.

Covid-19 vaccine will be ‘reality’ by year-end: Fauci