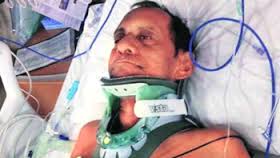 Washington, Oct 29 (IANS) An Indian grandfather slammed to the ground by an Alabama police officer posed no threat to police, two fellow officers testified in the retrial of the cop charged with use of excessive force.

Sureshbhai Patel, who had arrived days earlier from India to take care of his grandson, presented no threat to police, Madison Police Officer Charles Spence told a Huntsville court Wednesday. “To me, he appeared to be in his 70s.”

“There was no criminal conduct to document” by Patel and that no reasonable suspicion existed to lay hands on Patel, testified Lt. Clint Harrell, according to local Al.com. “Even if they are accused of something, you still treat them right.”

The first trial of former Madison Officer Eric Parker for the Feb 6 takedown of Patel while he was taking a walk near his son’s home ended early last month with a hung jury, as the jury split 10-2 in favour of acquittal.

As police responded to a neighbour’s call about a “skinny black man” walking near homes and looking at garages in Madison, Spence circled back and arrived just in time to see the takedown by Parker. Spence, a 20-year patrol veteran of the Madison force, said he did not observe Patel jerk his hand away from officers. “Did you see anything that indicated force was necessary?” asked Assistant US Attorney Robert Posey. “No, sir,” said Spence.

The defence argued that Patel pulled his hand away from an officer and that he could have been reaching for a weapon.

Patel himself was the second witness of the day. This time he entered the courtroom with a walker. During the initial trial last month, the FBI brought Patel to the witness stand in a wheelchair.

Patel who speaks Gujarati, an Indian language that according to Al.com is now the eighth most common language in Alabama households, testified through a translator. Asked why he came to America, Sureshbhai Patel, whose son, Chirag Patel, is an engineer with a defence contractor in Huntsville, said “I came here to play with my grandson.”

Patel said he walked in the mornings “to the extent of 10 to 11 homes.” He said he never walked through yards.

The neighbour who called police did not say Patel did, although a radio dispatcher mentioned yards in relaying the information to police. “I was walking on the stone road,” said Patel, indicating the sidewalk.

“I was returning to my home and somebody shouted from the back and I stopped,” said Patel. He said that he recognized the police uniforms and told officers “no English” and “India.”

“I did not try to run away but I did go back a couple of steps to show them my house, my house,” testified Patel. “They put their hands on me and I was just standing and did not move.”

Did he jerk away from the officers? “No, they just get my hands and I stood there.” Did he resist? “No.” Did he have any weapons? “No.”

“When they put me on the grass my whole body went numb,” he said.

Quizzing him on his language skills, Defence attorney Robert Tuten asked: “Do you understand the word stop, Mr. Patel?”. He said no.

The defence has argued that Patel did not comply with police instructions, that he walked away and jerked his hand away and reached for his pockets.