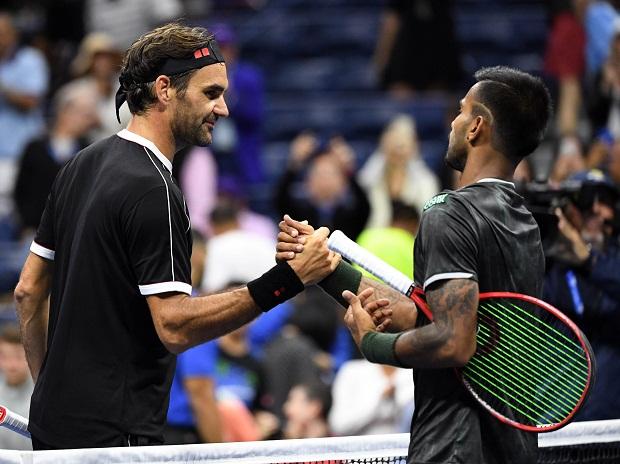 New York, Aug 27 (IANS) Former World No. 1 Roger Federer has heaped praise on Sumit Nagal, saying the 22-year-old Indian played really well in the first round contest of the US Open which was won by the Swiss legend.

On Monday, Indian qualifier Nagal became the first tennis player to win a set in the first round of the US Open against Federer since 2003. Although, the 22-year-old from Jhajjar lost the match 6-4, 1-6, 2-6, 4-6 in two hours and 30 minutes, he won the praise from the current World No. 3.

“(It’s) never easy to come out and play your best. Even though it’s kind of what you live for, you dream about, playing on the big stage. So I think he did that very well,” Federer was quoted as saying by the official US Open website in the post-match on-court interview.

“I think his game is based on being really consistent,” added Federer.

The five-time US Open champion further said that Nagal is much of a clay-court player as he has played his majority of tennis on the red soil.

“He moves well, moves the ball around well. Sort of very much a clay-courter. That’s also the surface he’s played basically the entire year almost.

“I think he knows what he can bring. That’s why I think he’s going to have a very solid career. But, of course, it’s not the game that comes out with the biggest surprises. It’s really consistent. I think he did it very well tonight,” he added.

“He showed incredible composure against the greatest player in the world and held his own,” Bhupathi told IANS.

“I think both he and his coaching team should be very proud of the improvements they have made this year,” the Indian tennis great and Davis Cup non-playing captain added.

Federer will now face Bosnia’s Damir Dzumhur in the US Open second round.