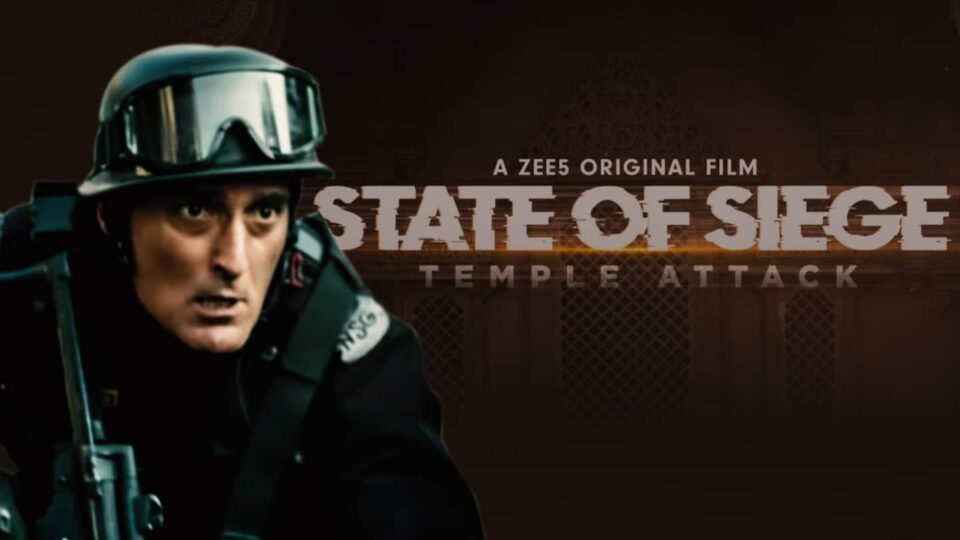 The compelling opening immediately draws you in. Amidst the tranquil, snow-laden landscape of the picturesque Kupwara, J&K, 2001, we meet Major Hanut Singh (Akshaye Khanna), a man on a mission to rescue a kidnapped minister’s daughter. Tranquility transforms to tension as the slow burn pace gradually picks up with a sudden turn of events, supported by apt audio-video effects leading to the buildup.

Major Hanut Singh has defied a direct order and almost accomplishes his mission, but a casualty is one of the consequences of his action. When we meet him again in 2002, he is still grappling with his guilt and working through his grief in his own ways.

Zee5’s State of Seige: Temple Attack opens with the disclaimer that it is a fictionalized version of the September 24, 2002 attack on Akshardham Temple in Gandhinagar. But then Krishna Dham temple lies at the core of director Ken Ghosh’s tension-ridden terrorist attack, where pilgrims are killed and held hostage by four terrorists (instructed by a handler) who demand the release of one of their gang members, Bilal Naikoo (Mir Sarwar). Ahmedabad police are aided by NSG (National Security Guards) who seize command of the situation.

The temple attack is planned even as the state chief minister (Sameer Soni) addresses a conference of industrialists in the banquet hall of a hotel. The NSG is initially called in to secure the area.

The temple takeover begins on a chilling note when terrorists who enter in a line begin to brandish weapons starting from the security guard and progress to random killings as blood splashes all over, the most unsettling, that of two old women who are shot even as they hold hands and beg for life by one of the terrorists who is simply trigger happy. He also kills an old couple, just for the joy of killing even when instructed that no more hostages are to be killed.

Writers William Borthwick and Simon Fantauzzo choose to define their terrorist types – so we have the trigger-happy hot-headed kind, the naïve, mild young one, the physically strong one, all led by, of course, the levelheaded one. We also get a brief overview of the victims – a child who is supposed to visit the temple with her parents to wish her grandmother on her birthday, a father who owns a sweet shop across the temple and his son who is a tour guide, and American tourist and her Indian friend.

So far, so good. But Ghosh chooses to infuse socio-political correctness into his narrative. So, to balance out the Muslim terrorists, there are a lot of good Muslims thrown into the mix – a Muslim sweeper at the temple who tries to preach about humanity to the terrorists, a Khan on the NSG team, and a Hindu traitor.  The preachy closing scene adds no value except to make you sigh.

Akshaye Khanna’s restrained and refined approach to Hanut Singh is riveting. His eyes add to and elevate the intensity of the tepid thriller. In his interview with NRI Pulse, Khanna mentioned that one of the things he learnt from Col. Sen was body language and he learnt it well. Throughout the 110 minutes of Seige.., I only watched a commando in action, his guilt and grief stuck self, trying to redeem and redeliver, all poignantly communicated with subtle body language, his signature eyes and fitting voice modulation.

“NSG must engage,” says Khanna’s Singh and they do. Ghosh’s love and respect for men in uniform is evident in his portrayal of the NSG commandos who swing into action. Despite numerous web shows and movies inspired by exploits of intrepid soldiers, it is always heartwarming to zoom into the individual sacrifices of our fallen heroes. Ghosh’s sequences surrounding NSG commandos supported by choreography by Mandhar Verma and Rinku Bacchan pay a fitting tribute to the valor and martyrdom of these brave men. Tejal Pramod Shetye’s cinematography deserves a special mention in capturing these moments and the opening scene, all at their cinematic best.

During the 2002 terror attack on Akshardham Temple in Gandhinagar, Gujarat on September 24, 2002, two armed men killed 33 people, including a NSG commando and two Gujarat police officers, and injured 80 people. The attack followed the Godhra riots, a fact glossed over with a passing mention in Seige..

Had it not been associated with the Akshardham terror attack of 2002, I would’ve enjoyed Seige… so much better. But then, it is. And we know all the facts and even the aftermath. There are situations and characters that are unquestionably parallel to the 2002 attack. The disclaimer of fictionalization begins to fade as the viewer delves into the movie with the facts in the head and similar characters and situations on screen. Deliberate attempts to remain politically correct only weighs down the strong impact it would otherwise impart.

I would watch Seige.. for its earnest portrayal of men in uniform and of course, Khanna at his patriotic best.

Half Girlfriend: Performances save this half-baked mush