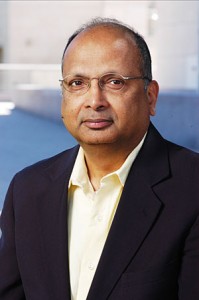 The scientist hails from Coimbatore in Tamil Nadu, about 360 km from here.

Named after Nobel laureate Guglielmo Marconi, who invented radio, and set up in 1974 by his daughter Gioia Marconi Braga through an endowment, the Marconi Society annually awards an outstanding individual whose scope of work and influence emulate the principle of “creativity in service to humanity” that inspired Marconi.

The prestigious prize includes $100,000 honourarium and a sculpture. Its honourees become Marconi Fellows.

“I am honoured to be chosen for the Marconi Prize and join such an illustrious group of pioneers. It has taken efforts of thousands of engineers and researchers to make MIMO technology a reality. My role, in comparison, is indeed small,” Paulraj said in the statement.

“MIMO will soon be pervasive in all wireless devices as Paulraj’s work has provided fertile ground for thousands of researchers to explore and advance its potential to enhance wireless spectrum efficiency,” said Payne, who is also director of the opto-electronics research centre at University of Southampton in Britain.

Paulraj was also honoured with the IEEE Alexander Graham Bell Medal in 2011 for his work on theoretical foundations of MIMO.

“Paulraj is the only India-born scientist to receive both the Marconi Prize and the Bell Medal – the two top global IT technology awards,” IndiaTechOnline.com editor Anand Parthasarathy told IANS here.

On Paul (as he is popularly known in tech circles) bagging the latest prize, Infosys co-founder and chairman N.R. Narayana Murthy said Paulraj’s brilliance and perseverance have revolutionised wireless technology bringing a lasting benefit to mankind.

“Paul is a wonderful role model for researchers the world over,” Murthy said here.

Paulraj has been a strong proponent for reviving India’s telecom technology industry, noting the high cost to the nation for its near total dependence on telecom imports.

Before Paulraj migrated to the US in the early 1990s, he worked in India where he was well known for pioneering the development of sonars, which detect objects under water by emitting sound pulses and detecting their return.

“Paulraj was the founding director for three major labs in Bangalore – Centre for Artificial Intelligence and Robotics (CAIR), Centre for Development of Advanced Computing (CDAC) and Central Research Laboratory (CRL),” the statement said.

“While serving in the Indian Navy, Paul was associated with the development of the Advanced Panoramic Sonar Hull (APSOH), which is considered a major achievement in military electronics, as even after three decades, the sonar device is used in the naval fleet of warships,” the statement added.

Paulraj is also an honorary professor at the Beijing Institute of Posts and Telecommunications and Imperial College London.