Atlanta, GA: The USA India Business Summit (UIBS) has a three year old unique history of being the largest conference in the Southeastern USA that promotes business relations between the USA and India. 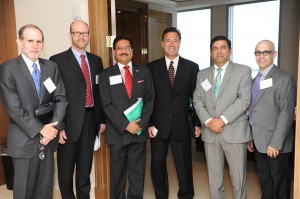 The seminar featured a wide range of immigration experts, including nationally recognized speakers, whose practice concentrates on legislative matters and policy development.

Ani  Agnihotri, Chairman of UIBS, opened the conference and introduced the  guests and co-sponsors, including the Consul General of India, His Excellency Ajit Kumar. Consul General Kumar offered an insightful perspective on U.S.-India trade and investment, and the key role of immigration in that relationship. He called upon U.S. policy makers to adopt reasonable immigration rules that are conducive to economic development and expansion.

Tino Mantella, President of the Technology Association of Georgia (TAG), also drew attention to the critical role of immigration policy in the development of the technology industry in Georgia. Daryl Buffenstein, a past President of the American Immigration Lawyers Association (AILA) and one of the managing Partners of Fragomen pointed out that it is important for companies to engage in the immigration debate in order to improve immigration proposals and to ensure that they are not overly negative. He said that immigration is important both for foreign companies investing in the U.S. and for U.S. companies who deploy personnel in other countries.

Five panels at the conference produced a lively and informative discussion, ranging across the spectrum of issues involved in employing Indian Nationals in the United States. Topics included current challenges in recruiting and hiring Indian national employees, impact of proposed legislation on recruiting and hiring Indian national employees, current challenges in obtaining green cards for Indian nationals, impact of proposed legislation on green card availability and timing, and sending employees to India. The focus was current challenges as well as on possible future changes. Conference chairman, Ani Agnihotri echoed the sentiment expressed by many of the participants: “This conference is a key step forward,” he said, “in understanding the depth and impact of the immigration issue, so that more effective solutions can be crafted.”