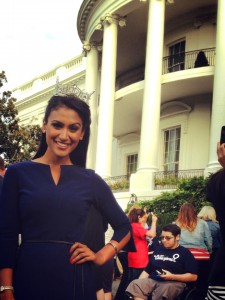 “Had the pleasure of having a conversation with President @BarackObama in the Oval Office today! @NinaDavuluri #Celebration13,” Davuluri tweeted shortly after meeting the president at the White House Wednesday morning.

“Miss America participated in a group photo with the president in honour of the Children’s Miracle Network Hospital Champions,” a White House official said. “Following the photo, she briefly visited the Oval Office,” the official said.

Incidentally, Obama had referred to Davuluri’s achievement as he spoke about “incredible people-to-people ties that exist” between India and the US during his Sep 27 summit meeting with Prime Minister Manmohan Singh here.

“You know, Indian-Americans make extraordinary contributions to the United States every single day — businessmen, scientists, academics. Now Miss America is of Indian-American descent. And I think it’s a signal of how close our countries are,” he then said.