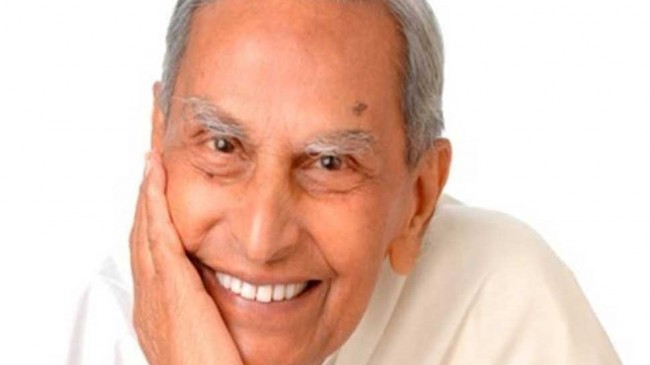 “Dadaji breathed his last at 9.01 a.m. today. He was 99. His body has been kept for final darshan at his ashram, Sadhu Vaswani Mission,” the spokesperson told IANS.

He was admitted to a private hospital here a few days ago for treatment of age related issues and had been discharged on Wednesday.

Vaswani passed away amid mega-plans for his 100th birthday on August 2, which his devotees from all over the world were expected to attend.

Born on August 2, 1918, to a Sindhi couple Pahlajrai and Krishnadevi Vaswani of Hyderabad in the undivided India, Dada Vaswani – as he was revered by the community – was one among seven children, three sisters and four brothers.

He headed the Sadhu Vaswani Mission – founded by his uncle and spiritual Guru, the late Sadhu T.L. Vaswani in Hyderabad (Sindh, Pakistan) in 1929, which has now branched out all over the world.

Following his demise in 1966, Sadhu J.P. Vaswani was anointed his successor and he carried forward the legacy of his Guru’s Mission globally.

A proponent of world peace, vegetarianism, girls’ education, compassion for the poor, among others, Sadhu Vaswani addressed the British House of Commons in London, Global Forum of Spiritual Leaders in Oxford, World Parliament of Religions in Chicago, Millenium World Peace Summit of Religious and Spiritual Leaders at the UN, Parliament of World Religions in South Africa,.

He initiated a global peace initiative – The Moment of Calm, when people observe two-minutes of silence to forgive all, on August 2, with eminent personalities like the Dalai Lama joining.

Among various national and international honours conferred on Sadhu Vaswani were the U Thant Peace Award in 1998, jointly with Pope John Paul II.

The upcoming event in Atlanta to celebrate Dada J. P. Vaswani’s 100 years will take place as planned.
When: Sunday, July 15 from 4 pm to 6 pm
Where: at Chapel Hall, The Jimmy Carter Center
Should you wish to join, please RSVP via the evite link below.
http://evite.me/dDTWBtEmPa