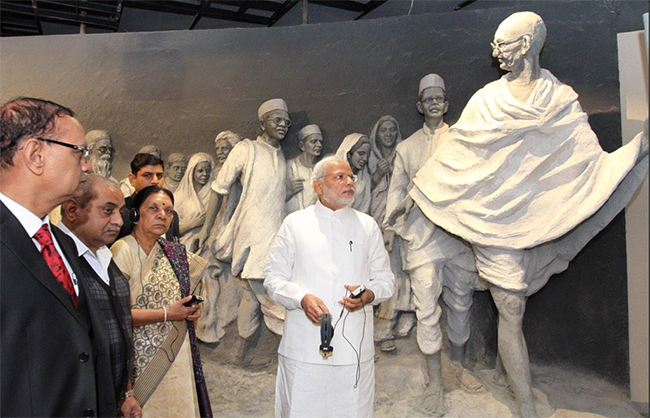 Gandhinagar, Jan 8 (IANS) Prime Minister Narendra Modi Thursday said every NRI is like a “shakti” and if the strength of the entire diaspora can be consolidated, it could become a driving force for India’s progress.

Addressing the inauguration of the 13th Pravasi Bharatiya Divas here, the world’s largest annual gathering of people of Indian origin, Modi also said that he has fulfilled his promise to the diaspora of merging the Persons of Indian Origin (PIO) and Overseas Citizenship of India (OCI) cards.

He exhorted the diaspora to come and contribute to India’s success in any way possible, including knowledge, expertise or skills. He mentioned in particular, the Namaami Gange project to clean River Ganga, and said 40 percent of India lived by and survived on the river. He said he was sure all NRIs would be inspired to contribute to this cause.

Modi said the world is ready to “embrace India” and cited as an example the fact that his proposal at the UN to institute an international yoga day was supported by a record 177 nations and in just 100 days.

“We have a lot to give to the world, we only lack the confidence,” he said, calling upon NRIs across the world to forge and take pride in a common identity and heritage, and to use this strength collectively.

He said even if a solitary NRI is present anywhere in the world, India is alive and present in that corner of the world through him or her.

Modi said he had met representatives of 50 countries since assuming office in May last year, and he could say with confidence that all nations rich or poor across the world today feel that their goals and objectives can be met in partnership with India.

He said then prime minister Atal Bihari Vajpayee had proposed the idea of starting a PBD and it was begun in 2003.

Referring to the apparent slackening in enthusiasm during the past few years to the annual gala, Modi said that “in between, little little, people did not feel like coming. Few would come and a few came because they had to come; but I would come regularly,” to laughter among the crowd.

“We are extremely proud of our diaspora. They have made India global and their strong values have endeared them wherever they have gone,” he tweeted later.

He recalled how Indian festivals such as Holi and Diwali are enthusiastically celebrated in Guyana, that Jan 8 also happens to be the founding day of the African National Congress in South Africa and Mahatma Gandhi’s birth anniversary Oct 2 is observed in Mauritius with even greater vigour than in India.

A PBD Kendra is also coming up in New Delhi and would be inaugurated soon for the benefit of pravasis, he said.

Overseas Indian Affairs Minister Sushma Swaraj said the government is determined to work closely with its huge diaspora to “leverage each other’s strengths for mutual benefita and urged professionals from the diaspora to join in efforts to develop India and “restore it to its past glory”.

“A successful, prosperous and politically influential diaspora is an asset to India, much as a strong and self-reliant India would be a source of strength and inspiration for the diaspora. This synergy acts as a vibrant bridge between us and sustains our relationship,” she said.

Guyanese President Ramotar, chief guest at the 13th Pravasi Bharatiya Divas, Thursday urged India to play a more active role on the global stage and be the voice of the developing world.

South African Foreign Minister Nkoana-Mashabane said she was happy to join in the celebrations of the centenary of Mahatma Gandhi to India from South Africa. She described India as her second home having spent six years as a high commissioner here.

The government also announced a list of 15 NRIs who would be conferred the Pravasi Bharatiya Samman awards for 2015. The list includes Ramotar and Satyanarayana Nadella, CEO of Microsoft.

The event is being held in Gandhinagar Jan 7-9 to mark the centenary of the return to the country of India’s “sarva sreshtha pravasi Bharatiya” or foremost Indian diaspora member, Mahatma Gandhi from South Africa.

Earlier, Modi inaugurated the ‘Dandi Kutir’ museum located opposite the Mahatma Mandir in Gandhinagar. The three-storey exhibition, housed in a dome shaped Salt Mountain structure, traces the life and times of Gandhi.

Nearly 4,000 delagates from 44 countries are attending the Pravasi Bharatiya Divas 2015. A mega exhibition spread over 1.1 million sq ft has also been organized as part of the programme.