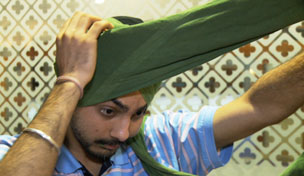 Washington, May 1 (IANS) Sikhs have to explain to American people what the turban means because that is the immediate source of their identification, according to the author of a new report on Sikhs in America presented to US lawmakers.

“Sikhs have to explain what it symbolizes and what values it represents,” said Geoff Garin, former political strategist for presidential candidate Hillary Clinton presenting the key findings of the report at a briefing arranged by the National Sikh Campaign (NSC).

“This will have a very powerful impact on the broader American public,” he said. “The study shows that when people see Sikhs on the streets anywhere, people are very confused about what Sikh faith is and that confusion leads to tragic consequences,” said Garin.

“They also feel that they will not have very much in common with Sikhs.”

Garin, whose current clients include the World Bank, Bill and Melinda Gates Foundation and the Harvard University, heads the Hart Research Associates, one of the leading survey firms in the US.

The firm conducted a six-month long nationwide polling and focus group study to understand how Sikhs are perceived in America and what strategies would be helpful to change perceptions.

The report lists specific messaging techniques which Sikhs could use in their media strategies resonating with American public.

Garin said the survey showed that 6 out 10 Americans acknowledge that they know nothing at all about Sikhs and Sikhism.”

Judy Chu, founder and vice chair of the Congressional American Sikh Caucus, called it “a very significant report about the American perceptions of the Sikh community.”

John Garamendi, co-chair of the Sikh Caucus, said, “It’s extremely important that the people of the United States and beyond learn and understand the multiple cultures that we have in the United States.”

Dr. Rajwant Singh, senior advisor to NSC, said the NSC plans to start a media ad campaign based specifically on this study and the various intricate details input collected from common Americans.