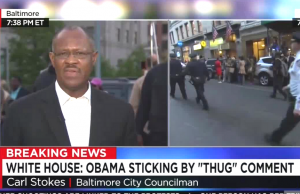 Washington, May 1 (IANS) As Baltimore City. just over 60 km from the American capital, erupted into riots and violence over the police-custody death of a black man, it also ignited a debate over the Hindi word ‘thug’ after President Barack Obama used it to describe the rioters.

So did Baltimore Mayor Stephanie Rawlings-Blake and lo and behold it had been uttered 625 times on TV on Monday, according to regressing.deadspin.com citing iQ Media that tracks closed captions in all US markets.

“The word ‘thug’ has been used so many times by the same sort of people about the same sort of thing that it’s no longer even accurate to call it code – it’s really more of a shorthand,” it said.

Webster’s Dictionary defines “thug” as “a brutal ruffian or assassin,” but the website suggested “It means a black guy who makes white folks a little more uncomfortable than they prefer.”

“These are children who have been set aside, marginalized, who have not been engaged by us. No, we don’t have to call them thugs.”

The Rev Jamal Bryant drew the same comparison on CNN. The President and the mayor are wrong, he said. “These are not thugs, these are upset and frustrated children.”

‘Thugs’ is the 21st century word for the n-word, said Bryant. “And it is repulsive and it is offensive to every person who is a parent trying to raise children interpreting what’s taking place in this hour.”

“‘Thugs.’ ‘Thug.’ The derision here-dismissive, indignant, wilfully unsympathetic-is implied in the sound of the word itself,” said the Atlantic magazine tracing “The History of ‘Thug'” to colonial India.

“Even if you hadn’t heard the word before, even if you had no idea what it meant, you would probably guess that it is an epithet,” it said.

“In Baltimore over the past few days, the term has been flung about by commenters both professional and non-, mostly as a way of delegitimizing the people who are doing the protesting and rioting,” said the Atlantic.

“To dismiss someone as a ‘thug’ is also to dismiss his or her claims to outrage,” it said.

So much so Rawlings-Blake had to clarify her comments on ‘thugs’. “When you speak out of frustration and anger, one can say things in a way that you don’t mean,” she wrote on Twitter Wednesday.

“That night we saw misguided young people who need to be held accountable, but who also need support. And my comments then didn’t convey that,” she added.

According to CNN, National Football League (NFL) player Richard Sherman has previously called the term “the accepted way of calling somebody the n-word nowadays.”

“Etymology experts have traced the word thug to the Hindi word meaning a cheat or a swindler,” said the Newsweek outlining a brief history of the word ‘Thug’ prompted by Baltimore.

“Colonial accounts speak of groups of Thugs who practiced Thuggee and would rob and kill travellers,” the magazine noted.

“Some accounts describe these Thugs as belonging to a religious cult that worshipped the goddess of death and destruction and killed in order to please her.”

“Such accounts made their way into Western culture during British colonization and through anthropological writings,” it noted.