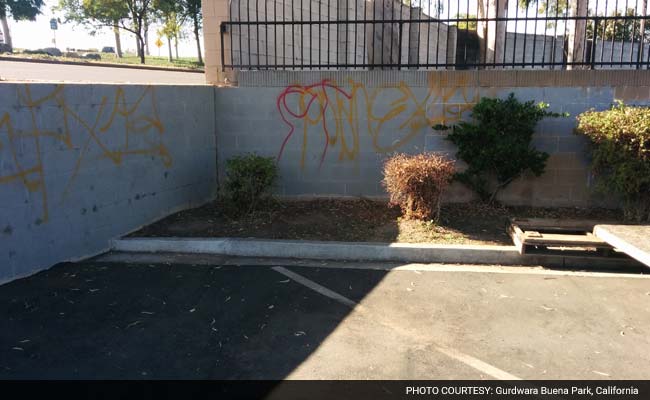 Washington, Dec 9 (IANS) In the wake of San Bernardino shootings last week by a Pakistani origin couple, a Sikh gurdwara in Buena Park in Los Angeles suburbs, was vandalized with anti ISIS and anti Islam graffiti.

Hateful graffiti was seen on the walls of the Gurdwara and also a truck parked in the parking lot Sunday morning, according to a Sikh community organisation. It included the phrase, “F**k ISIS,” and the words “Islahm” and other references of gangs.

Buena Park Police Department is investigating and has been in touch with the officials of the Sikh congregation, according to Washington based Sikh Council on Religion and Education (SCORE).

President of the Sikh Gurdwara, Inderjot Singh said, “We are concerned about the safety and security of our community members. We are of the opinion that this is a hate crime and that this is a direct result of a possible backlash from the San Bernardino killings.”

Located very prominently on the main road in the city, the Sikh gurdwara is attended by over 800 community members on a weekly basis.

Sikhs have faced hate crimes and violence in the past due to their outer appearances, SCORE said. A Sikh temple was attacked by a gunman in Oak Creek, Wisconsin in 2012 and six Sikh worshippers lost their lives in that shooting.

Sikh men wear turban and beard and often become a target of hate due to ignorance about Sikh religion and its origin in America.

In addition, White House has forwarded the incident to Department of Homeland Security to investigate, it said.

“The Sikh community across the nation is in a heightened state of alert and is deeply troubled by this latest incident,” Singh said.

“We are appealing to all Sikh place of congregation to be in touch with the local law enforcement agencies as well with the elected officials.”

“We are also concerned with the recent anti-Muslim rhetoric coming out of some of the contenders of American presidency,” he said warning, “This will directly result in elevated level of violence against minority religions in America and particularly the Sikhs.”

“We are fearful that this kind of hate speech against Muslims with engulf Sikhs and members of the Muslim community across the nation.”