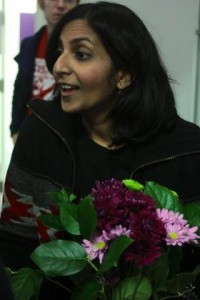 Washington, Nov 19 (IANS) Kshama Sawant, a Pune-born young Indian-American activist-academic, has become the first socialist to be elected to a public office in the US, with a narrow victory in the Seattle city council election over the 16-year Democratic incumbent.

Sawant, an economics college professor who studied software engineering in Mumbai and economics in the US, was declared elected after her opponent Richard Conlin conceded as her lead grew to 1,640 votes.

Conlin was backed by the city’s political establishment, but Sawant’s grassroots and her campaign on taxing the wealthy to fund city needs and a $15 minimum wage resonated with the 400,000 electorate in Seattle, the largest city in the Pacific Northwest region of US in Washington state.

On Nov 5 election night, Sawant was trailing by four percentage points, but ballots counted after election day turned the tide in her favor.

At a victory rally Sunday, Sawant called her win a “Political Earthquake” according to SeattlePi, a local news site.

“We’ve shown that it’s possible to succeed. In a grassroots campaign with an openly socialist campaign not taking money from big business,” she said.

Sawant held part-time teaching positions at Seattle Central Community College and Seattle University and and was a visiting assistant professor at Washington and Lee University.

She earlier ran unsuccessfully for the Washington State House of Representatives.

Born to Vasundhara and H.T. Ramanujam in Pune in 1973 in a middle-class Brahmin family, Sawant grew up in Mumbai where she later studied computer science and graduated with a BSc from the University of Mumbai in 1994.

Sawant married her husband Vivek, an engineer at Microsoft, and moved to the US.

After moving to the US, Sawant decided to abandon the computer engineering field, according to her biography.

Sawant moved to Seattle in 2006 and became a US citizen in 2010. Sawant and her husband Vivek are now separated.