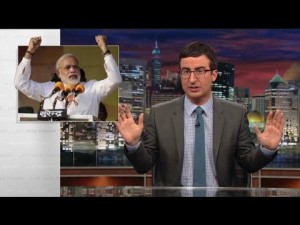 Washington, April 29 (IANS) A video of British comic John Oliver taking a swipe at the American media for ignoring India’s election, “the largest democratic exercise in the world and in history,” has gone viral.

Here a guest is seen saying: “India is not even in the same hemisphere and there’s no point of discussing it.”

Mocking the unidentified channel with a cut globe showing only its western half, Oliver, who was earlier a guest host on “The Daily Show with Jon Stewart” points out that: “The India election is not even that complicated.”

“Just like an American election, all it really comes down to is two people,” he says describing it as essentially a contest between Congress vice president Rahul Gandhi and Bharatiya Janata Party’s prime ministerial candidate Narendra Modi.

“Let’s begin by dealing with Gandhi first. I know, I know, it’s not the first time that’s been said in a British accent,” Oliver says as he calls Gandhi ‘Indian Hans Solo’ with his handsome looks and political lineage who is likely to lose to a “tea-seller”.

“Modi sold tea in a railway station, and now he’s the most popular man in the country.. don’t pretend you’re not interested in this, America. Last time you heard a rags-to-riches story about a tea-selling Indian kid, you threw a [expletive] Oscar at it,” he said, as the poster for “Slumdog Millionaire” appeared.

He also mocks the Indian media for taking too many cues from the West.

CNN in India is targeted for titling an election story “One Billion Votes” when India actually has only 800 million plus voters, saying: “Their own graphic is wrong by the entire population of Brazil.”

Turning to Times Now’s Newshour debate, he suggests it has come close to American media and exclaims in mock horror. “Do you have a ludicrous number of people shouting at each other in a TV debate? Check.”

Commenting on the segment, the New York Times said it “seemed to speak for the legions of Indian journalists who actually are covering the story, as well as the political junkies here who are avidly tracking every development.”

The Washington Post called it a “a smart, protracted segment on the western media market’s stubborn disinterest in the current Lok Sabha polling in India – the biggest election in history, by sheer numbers”.

The Wall Street Journal termed it “A hilarious eight-minute rant” saying it “gave more insight and airtime to the Indian elections than most US television news channels”.

Here’s the link to the video. John Oliver On Indian Elections 2014 – Narendra Modi Vs. Rahul Gandhi