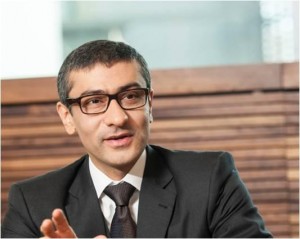 “As Nokia opens this new chapter, the Nokia Board and I are confident that Rajeev is the right person to lead the company forward,” said Risto Siilasmaa, chairman of the Nokia board of directors, in a statement Tuesday.

“He has a proven ability to create strategic clarity, drive innovation and growth, ensure disciplined execution, and deliver results. We believe that his passion for technology will help ensure that Nokia continues to deliver innovations that have a positive impact on people’s lives,” Siilasmaa added.

Siilasmaa, who has also been serving as an interim CEO, will return to focusing exclusively on his role as chairman of Nokia’s board of directors from May 1.

“I am honoured to have been asked to take this role, and excited about the possibilities that lie in our future,” said Rajeev Suri.

“Nokia, with its deep experience in connecting people and its three strong businesses, is well-positioned to tap new opportunities during this time of technological change. I look forward to working with the entire Nokia team as we embark on this exciting journey.”

He has been CEO of Nokia Solutions and Networks (NSN) since 2009.

For a company that was regarded as the mobile phones pioneer and beaten by the likes of Samsung and Apple, Nokia announced plans for a five billion-euro programme to optimise its capital structure.

A new governance structure and the appointment of a new leadership team, effective May 1, 2014, will lead its way, the company said in a statement.

It said that its long-term leadership is targeted in three key areas. “Nokia believes that over the next 10 years, billions of connected devices will converge into intelligent and programmable systems that will have the potential to improve lives in a vast number of areas: time and availability, transportation and resource consumption, learning and work, health and wellness, and many more.

“This new world of technology will require: 1) connectivity capable of handling massive numbers of devices and exponential increases in data traffic; 2) location services that seamlessly bridge between the real and virtual worlds; and 3) innovation, including in sensing, radio and low power technologies.”

“Nokia’s vision is to be a leader over the long term in these three areas,” the stateent said.

“The world of technology is on the verge of a change that we believe will be as profound as the creation of the internet” said Rajeev Suri.

No China origin, will invest and hire more in India: Zoom