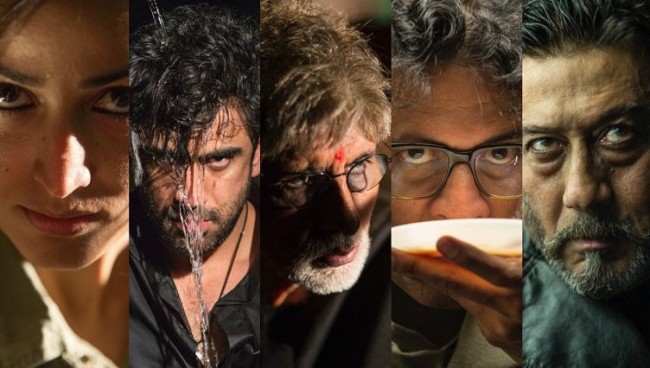 It is easy to see the third instalment of Ram Gopal Varma’s “Sarkar” franchise as an unnecessary carryover of a saga that has lost its relevance and sheen. But “Sarkar 3” rises far above the wasteland of a stagnant crime-drama to give us an insight into a life of outlawry that is richly layered with blood and drama.

Bal Thackeray is dead. Long live Bal Thackeray. In Amitabh Bachchan’s persona –steely, gritty, imperturbable, granite-hard and yet malleable and vulnerable — the Thackeray doppelganger is uncanny. The walk, the talk and the ability to walk that talk to places where the dialogue writer would never have imagined. Take a bow, Mr B. They don’t make em like you anymore.

It takes courage to build one more plot around that formidable and imposing figure from Maharashtra’s politics who rewrote the rules of politics and who gave political arrogance a sexy edge. The last Sarkar film came 9 years ago. And the figure of Subhash Nagre is now threatened with obsolescence, if not complete irrelevance.

And yet here lies Varma’s triumph. He manufactures a compelling if somewhat cramped and at times campy yarn of a wizened but still-spirited political outlaw who has no appetite for betrayal and disloyalty.

“In order to understand politics you first need to get a hang of the politics in the family. It’s called Palace politics,” says Subhash Nagre, slurping tea out of the plate while, please note, the grandson Shivaji (Amit Sadh in engaging form) also slurps over his cuppa.

Lineage, continuity and perpetuity are big in “Sarkar 3”. Outsiders are seen as traitors and marauders. In fact the film makes a pitch for nepotism in crime and politics arguing that absolute loyalty can only be traced in the bloodline. In blueprinting this genealogical fact of clannish life, the narrative stretches the tendons of its muscular drama into scenes that are constructed robustly and at times with enrapturing vividness.

There are some terrific shootouts in this film reminiscent of episodes from Ram Gopal Varma’s best gangster films in the past. Parking lots are a favourite haunt for violence in this film. Ram Gopal Varma seems to tell us there’s more to cars than Rohit Shetty. Indeed “Sarkar 3” marks the return to form for the long-disoriented filmmaker. He cuts and shoots the scenes in long shots and breathless pauseless frames that cover the dramatic tension without toppling over into overstatements.

Manoj Bajpai joins the gang-war somewhere in the preamble and opts out too soon. He has some of the best lines on the criminalization of politics. Sadly the script doesn’t listen to Bajpai’s harangue, busy as it is hero-worshipping the outlawed aging hero. Bajpai’s one sequence with Mr. Bachchan where Bajpai’s character Govind Deshpande mocks Mr. Bachchan’s Nagre from a public podium for subverting Gandhian ideals is worth its weight in gold.

Of course Varma being Varma he does like shooting his actors from odd angles, like Yami Gautam, who has never looked more seductive, captured from inside the handle of a teacup. Tea-hee.

The women, Gautam, Supriya Pathak and Rohini Hattangadi get little space in this predominantly masculine war of supremacy. And that one scene where Hattangadi blows a kiss at her screen son would have you whistling in excitement.

The background score didn’t have to be persuasive, though. We get the point without the over-punctuation.

Strangely very few people get killed in the course of the storytelling although the body count seems a lot higher. And when archvillain Jackie Shroff, swimming and sexing in Dubai, dies at the end “that’s not a spoiler, it’s nemesis”, we feel a surge of empathy for the Nagre family that has lost a lot of blood, but never in vain.

Watch “Sarkar 3” for the way Varma frames the familial feud in flames of fury. The performances are largely effective specially those by Ronit Roy and Amit Sadh. The latter comes into his own as Mr Bachchan’s uncontrollable grandson. But above all, this is one more triumphant celluloid outing for Amitabh Bachchan who invests his role of the aging tiger-neta with a kind of cosmic resonance that goes way beyond that famous baritone.

Yup, they don’t make star-actors like Amitabh Bachchan any more. Ram Gopal Varma reminds us of the Bachchan charisma in ways that are deeply nostalgic and exceedingly provocative.