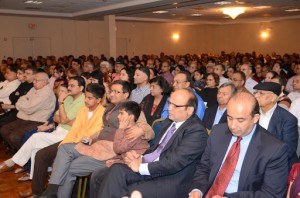 To give it a Holi flair, attendees were served a welcome drink, a delectable “Thandai”, by World Hindu Council of America (VHPA) volunteers, followed by a delicious dinner and dessert catered by Ashiana Restaurant. Ekal Atlanta Chapter President, Shiv Aggarwal welcomed all, and invited Hon. Rajinder Singh to address the gathering, who, in his brief remarks, lauded the role of EVF on behalf of the CGI, Atlanta. The Deputy Consul described Ekal as “a charitable Trust that initiates, supports and runs one-teacher schools. With participation of numerous non-profit Trusts and Organizations, this program has now become one of the prominent education movement to help eradicate illiteracy from rural and tribal India by 2015. Today, Ekal Vidyalaya is a movement of over 46,000 one-teacher schools, numerous voluntary workers, and field organizations. With this tremendous human force, Ekal movement strives to create a network of  literacy centers that will educate and empower children in rural and tribal areas. The donors, supporters and workers of Ekal Vidyalaya are motivated by a commitment to educate our illiterate brothers and sisters. Their unflinching dedication to serve their motherland is truly admirable.”

GAPI President,  Dr. Abhishek Gaur said: “I would like to address you in Hindi because children who attend Bal Vihar are present here in the audience. My family and I have a long association with Ekal Vidyalaya which since its inception has set up thousands of schools in rural and tribal areas. It is commendable that each Ekal school runs on one-dollar-a-day basis.” He introduced GAPI’s next President-Elect, Dr. Piyush Patel and donated $500.00 on behalf of GAPI.
Puneet Seth noted Ekal’s work as very inspiring. His words were “New York Life’s slogan is “Keep Good going” and that is exactly what Ekal is doing. How can you all do this? Ekal is a unique organization. “Vidya-daan” – the gift of education is the greatest gift one can give. By committing just $365 a year, you can help with a needy child’s education and eventually his or her quality of  life. I applaud Shiv Aggarwal for his community service and for organizing tonight’s fund-raiser and urge you all to take this opportunity to sponsor a school/schools generously.”
The Concert was emceed with grace and verve by Rachna Gupta. A short video on two large screens showed the strides Ekal has made in rural/tribal education, health, empowerment, and integrated village- upliftment work. The dream of Swami Vivekananda, “If the poor child cannot come to education, education must go to him”, is being turned into reality by almost 47,000  Ekal schools currently running in all the states in India.