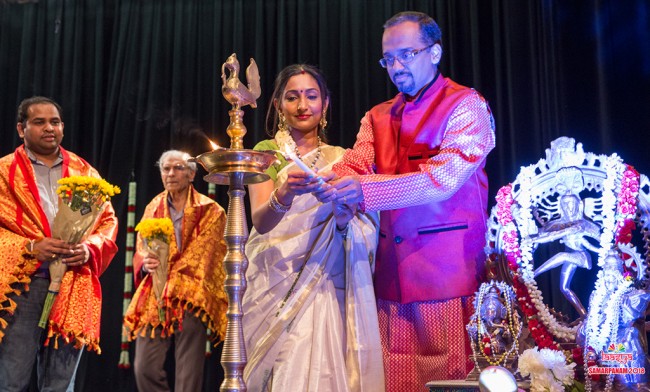 The stage was a gushing fountain of shimmering costumes in fetching colors, facial and hair adornments, dancer’s spirited performances and depth and range of popular ragas and fusion of instrumental music that created an esoteric fusion of the East and the West!

Ranjit Gangadharan warmly welcomed all to the first recital of the Dance academy. He said he and his wife Sridevi spent almost a decade across Europe and the Middle East, where due to job-related movement every few years, Sridevi could not start aDanceAcademy. It was only when the family moved toAtlantain 2012, that Sridevi found stability to set the foundations for a dance academy. She has since performed in over 35 dance concerts across the U.S.A. Laasya School of Dance was launched in 2015 and now, due to confidence and encouraging support of the parents and the community, the Academy has gained strength and patronage.

Sridevi  explained that ‘Samarapanam’ means offering or dedication. ‘My samarpanam is to Lord Shiva, the God of Dance, to give me an opportunity to acquire dancing talent and to perform all over the world. It is also an offering to all my teachers who painstakingly taught me every mudra, every step, and every gesture. But most important, it is my offering to my loving parents who toiled for many many years to help me learn Bharatanatyam, Mohiniyattam Kuchipudi and semi-classical dances. Samarpanam is also a dedication from my students to the cause, to the loving parents, to me, and to the entire audience,”she said.

Ranjit invited and recognized Smt. Leera Rawal who teaches Kathak dance in her ‘Era Leera School of Kathak Dancing’in Atlanta, veteran freelance journalist in Atlanta Mahadev Desai, President of Indian Friends of Atlanta Sreekanth Uppalla and C.O.O. of global non-profit Vibha, Kannan Udayarajan on stage, presented them with flower bouquets and draped them with shawls. They all then joined Ranjit and Sridevi in lighting the diya. 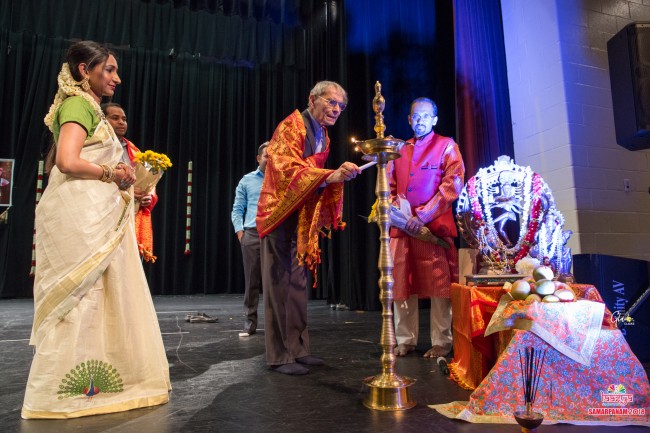 The show was emceed confidently and efficiently by young emcees Alaap Murali and Poornima Natarajan. All stood up as Alaap Murali began the program with a prayer song. Cheerful applause greeted the opening groups of dancers who performed uplifting traditional invocatory prayer dance to Lord Ganesha, Goddess Saraswati and Guru followed with Shiva Stuthi, and Pushpanjali. In the riveting dance to a folk song from Kerala, the performers depicted a village harvest scene. 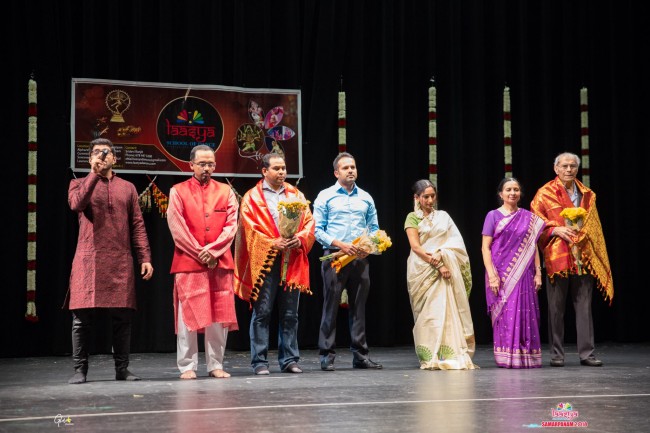 This was followed with Devi Stuthi-a dance to a keerthanam in praise of mother Goddess Parvathi and a dance with popular slokas. In the following spellbinding semi-classical dance to a hit Tamil movie song ‘Kannamoochi Yenada’ Radha was shown in beautiful Vrindavan garden singing to entice her lover Lord Krishna.

The program had three outstanding solo dances by the academy’s senior and most proficient students Meryl Roy (Ganesha Stuthi); Parvati Menon (Shiva Nadanam); and Rachita Iyer (Keerthanam about Goddess Durga). They enraptured the audience with their nuanced dances, emoting with finesse and grace. After Meryl’s solo dance, the audience were treated to Alarippu and Ganesha Pushpanjali dances. The dance to a beautiful Malayalam devotional song in prayer to Lord Vishnu,’Chethi Mandaram Tulasi’ was spiritually elevating. So was Mallari, a dance systematized by Ramaswamy Dixitar. After another enchanting dance to Keerthanam about LordKrishna‘Madhura Madhura Venu Geetham’ there was a brief  interval.

An engrossing Varnam dance with raga Thodi Talam by Adi music composer, Muthuswamy Dikshitar regaled the audience. To lighten the mood, this was followed with semi-classical dance ‘Mukunda Mukunda’ to a Tamil version of a devotional song from the movie ‘Dasaavathaaram’. An intense and graceful dance set to the hit Malayalam song ‘Sivakara dhamaruka’composed by the music legend Illayaraja and made timeless by the National Award-winning Malayalam movie ‘Kachu Kochu Santhoshangal’ mesmerized the audience. 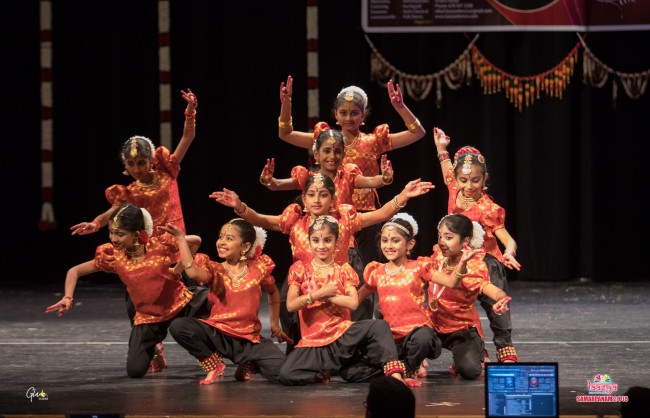 Ranjit invited Gopal Nair, Founder and President of Access LifeAmericaon stage, and gave a brief background of the organization. It is a non-profit currently helping fund Access Life Assistance Foundation in Mumbai, catering to a huge unmet need of providing safe and clean atmosphere to children and their families who travel to Mumbai from remote towns and villages for cancer treatment. Ranjit, who is himself a Director and volunteer of Access Life America informed the audience that the proceeds from the recital was being contributed to the non-profit in support of children fighting cancer in India.

The finale was a sight to behold when all were on stage eliciting well-deserved loudest applause from the enthusiastic audience.

An exuberant Sridevi also thanked all the sponsors, partners, parents, Academy’s students, volunteers and the audience. She further thanked Suresh Kumar from Sree Mookamibka for dance costumes and pastor C.V.Andrews, Surendra Guntipalli and Tan Lee for their generosity in supporting ‘Samarpanam’recital, and especially thanked her husband Ranjit and their two children Smaran and Soham for their unstinted loving support.