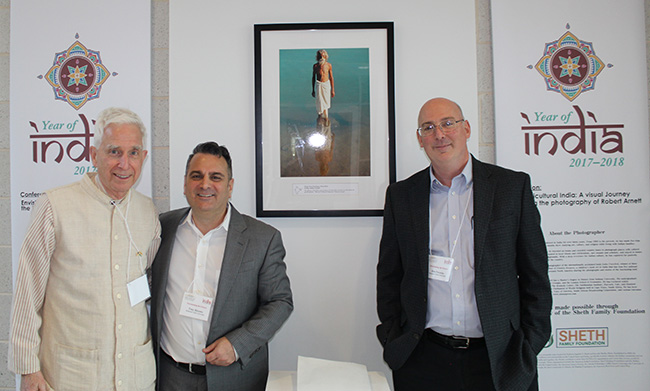 Atlanta, GA, April 9, 2018: On Friday March 16th, the department of architecture at Kennesaw State University held a reception for the opening of an exhibition of photographer Robert Arnett’s work entitled Multicultural India: A Visual Journey. Part of the KSU, Year of India Program, the exhibition accompanied a conference entitled Envisioning the Future: Understanding India’s Urban Ecologies. The exhibition featured 39 of Arnett’s photographs of India. The stunning collection of images captures the complexity of India’s rich cultural heritage. Arnett’s colorful and compelling photographs evince the richness of India.

The frontispiece of the exhibition, Hindu Priest Standing in Betwa River, confronts the visitor at the entry door. Standing regally before you reflected in the water he draws one in compelling us to stop, stand before him, take him in, and as the artist comments, forces us to ask the age-old questions ‘Who am I? What am I doing Here? Where am I going?’ This is a fitting entre to the exhibition. The west has often turned to India in its search for just such answers, answers that may never come, but one is inevitably reminded of the significance of the journey. It is just that journey that Arnett takes us on. 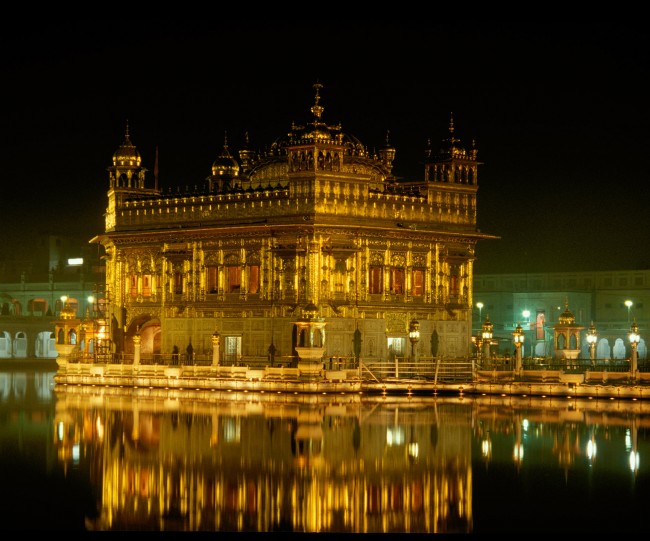 Most importantly, his eye brings to light the real diversity of religions in India, with examples of Hindu, Muslim, Buddhist, Jain and Sikh architecture, as expected, but also with images of Catholic Churches and Jewish Synagogues. Arnett treats each with the same loving eye. The result is that we are drawn into each with the same commitment and fervor of the faithful. The images dispel any sense of the stereotypical affectation of Indian spirituality, instead we come to an understanding of the true richness and complexity of her religious identities. The gold-leafed Sikh Harmandir Sahib (Golden Temple) in Amritsar Punjab, glistening in the night sky, is contrasted to the virginal white walls of the Church of the Immaculate Conception in Panaji, Goa. They flank a classic image of the Taj Mahal in Agra, seen across the reflecting pond under a bright blue sky. Each image captures the dignity of the monuments, while simultaneously speaking to their uniqueness, depth and beauty. To these are added images more typically associated with Indian architecture; young boys studying in front of the Mahakaleshwar Temple in Ujjain, the Vishvanath Temple in Khajuraho, the stairways in Varanasi leading into the Ganges River and the Gopuram at the Sri Mennakshi Temple in Madurai. Arnett’s work captures India’s architectural traditions across the subcontinent, again drawing our attention to the diversity and complexity that is its rich legacy.

But Robert Arnett’s true brilliance as a photographer is in capturing people. The portraits are not only compelling, they tend to hold the viewers’ gaze, but they appear to draw us into the subject’s soul in a way that is both intimate and voyeuristic at the same time. Sadhu an image of a wandering Hindu ascetic, shoulders slightly turned, head facing forward, eyes confronting us directly. He wears necklaces of well-worn prayer beads, his hair knotted on top of his head symbolizing his overcoming the desires of the material world. The image has the kind of formality often seen in portraits of the late 1800’s at the dawn of the art form. Arnett uses this device to capture the man’s dignity and stoicism.  Hanging with this image is Woman and Child in front of Buddhist Prayer Flags in Darjeeling, West Bengal. The subjects have the ‘spiritual eye’ of the Diwali Festival on their foreheads. Her Asian features add depth to the subject, this is not the ethnicity of this associated imagery. Arnett adds to this apparent contradiction a composition reminiscent of the Madonna and Child iconography. These juxtapositions force us to confront both our stereotypes of India and her cultural complexity. Both images play upon western artistic conventions to draw us in, only to force us to leave such assumptions behind and engage India on her own terms. 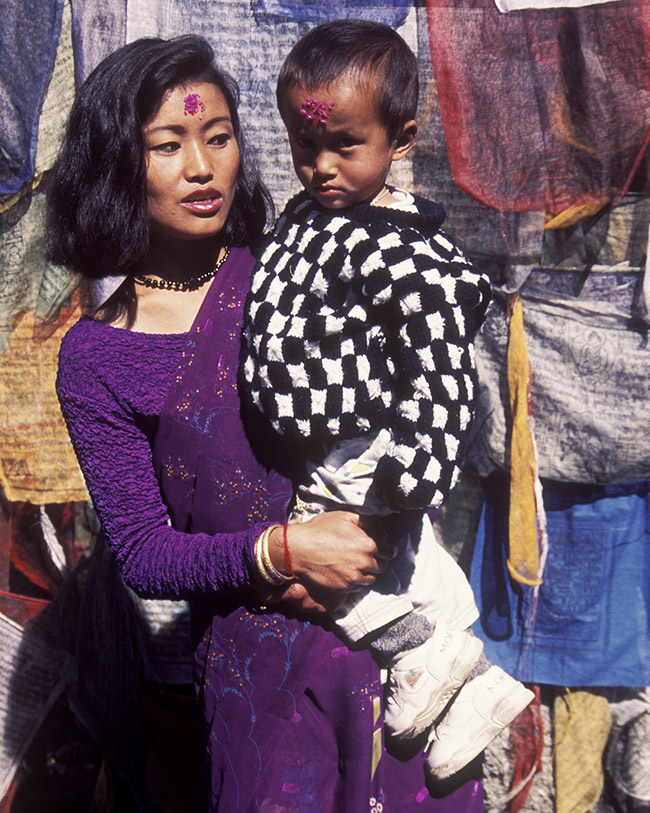 Arnett’s other portraits are both beautiful and disturbing as they draw us into an intimacy with the subjects that is uncomfortably voyeuristic. 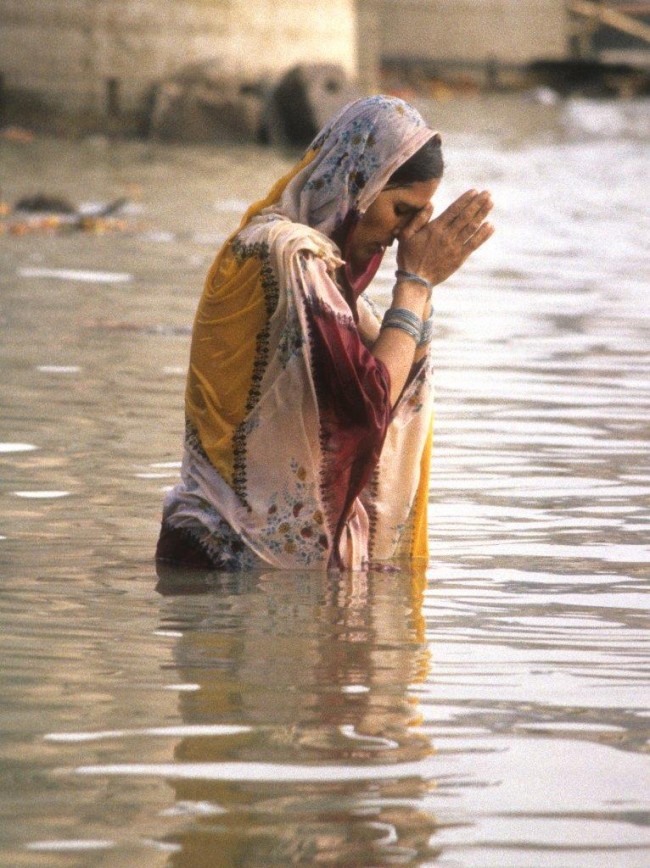 Hindu Woman Praying in the Holy Ganges River Varanasi, captures the intense moment of faith in prayer. The subject is at one with her god and we almost want to look away for its intimacy. The same can be said of Bride at Marriage Ceremony Gingee, Tamil Nadu. A stunningly beautiful image that captures the colorful and ornate adornments of the Indian bride. But she looks down in heavy contemplation. This is not a frivolous bride, she understands the solemnity of the ritual, the depth of the commitment and she intellectually reflects in that moment what she is doing and the impact upon her life and the life of her loved one. Marriage is beauty and love and joy, but we are reminded that it is also a sacred vow and a solemn commitment. Arnett’s skillful use of western artistic tropes to displace the viewer’s sense of place is evident too in Ladies Wading In Surf Puri, Orissa. Artists have long used the image of young maidens scantily dressed bathing in a river or lake. But here the lecherous eye is removed. These young women are fully dressed in their saris, they are laughing and enjoying the surf. The innocence of the moment is restored. We see in these strangers the joys of our youth and days at the beach. Once again, we are pulled in and connect with the subjects with an intimacy not often experienced in modern art.

Arnett’s work takes us on a journey through India, her culture, traditions and people. He does so by drawing the viewer in through familiar tropes only to use that entre to introduce us to the new- the reality of India. The exhibition Multicultural India: A Visual Journey is composed of a selection of photographs published by Arnett in his book India Unveiled Spirit, Tradition, People.

*Dr. Tony Rizzuto Ph.D. is the Chair and Associate Professor, Department of Architecture, College of Architecture and Construction Management at KSU.