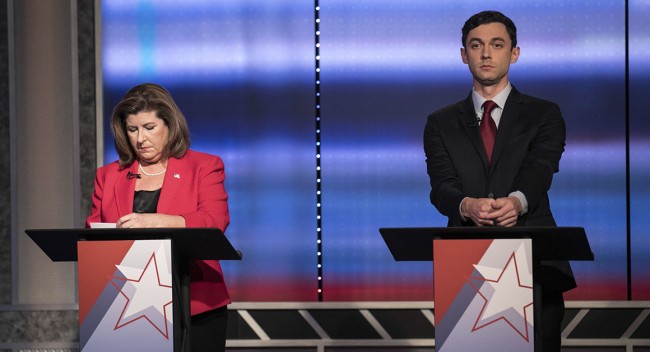 Campaigning is on in full swing for the June 20 runoff for Georgia’s 6th congressional district. Unlike in the earlier elections, one can see a number of volunteers, mostly young boys and girls, knocking on your door and seeking the vote and support for their party and candidate. Door-to-door campaign is being adopted by both parties even though it was originally started by Jon Ossoff, the Democratic candidate.

In addition to the volunteers visiting your home, you get phone calls every now and then, every alternate day if I am not exaggerating. As I write this, I just received a call from the Ossoff campaign. These calls come from live men and women from the campaigns. This is a change from the earlier robocall or one or two conference calls in the past elections.

Different interest groups are organizing town hall type meetings with pre-screened questions. Participants in the town hall meetings are not allowed to ask direct questions to the candidate because the organizers fear that opponents may be sending proxies to ask uncomfortable questions. Tons of paper is used for printing these campaign materials. I may have received at least 15 to 20 from the same candidate. If you are part of the “green campaign”, one will lament the number of trees that may have become pulp to print these materials. As election day approaches, TV ads with negative campaigns have also increased. In a nutshell, millions of dollars are spent in this special election by the candidates running the campaign and by the government in running the elections.

A close examination of the policy postures of the candidates, anti-abortion, anti-immigrants and anti-Iran nuclear deal, protection of speech for churches and balanced budget amendment are the decisive stands highlighted by the Republican Candidate, Karen Handel. The Democratic opponent, Jon Ossoff, on the other hand promises to support the continuance of Obamacare, Planned Parenthood and abortion rights. While the Republican campaign accuses Jon Ossoff as an outsider to the 6th district, inexperienced and a pawn in the hand of House Minority Leader Nancy Pelosi, Democrat Campaign charges Karen Handel with corruption in the earlier public positions held by her.

All the above are good stuff and standard political rhetoric heard in every election. In every country, politicians repeatedly promise to work for the same set of issues election after election.  In America, the Republicans’ pet issues are defense funding, tax cuts, second amendment, balanced budget and illegal immigrants and has been in their agenda ever since I started taking interest in politics.

Social Security revamp used to be another item which is now replaced by repeal and replace of Obamacare which they were trying ever since Obamacare was passed. Democrats on the other hand recycle issues like abortion rights, minimum wages, gun control and climate change. There are two new items added since 9/11 which are terrorism & national security. Education and infrastructure has started finding place in the agenda of both parties with appropriate color in recent years. Terms of the Government ends, party in power changes and a new leader/representative gets elected but the issues remain unresolved. This cycle makes it easy for the candidates in the next election because there is no need to reinvent a new issue, the list is already long. Some older voters get disenchanted and intermittently stay away on election day, while some keep voting as a sacred duty.

New voters reading the list of promises for the first time are enticed and enthusiastic about the newly acquired power to choose their government. The political process goes on. Voters keep experimenting their luck by re-electing or replacing the party in power in the hope that some good things will happen. And it does for some and others continues to be simple voters and remains satisfied that they are part of the system choosing their rulers for the next term. Once elected the elected representative forgets most of the promises, remains indecisive and makes everything possible to create logjam so that nothing gets resolved. Gun violence continues, drug trafficking increases, your local TV news is full of news about murder and crime every day, more young people are filling the jail, more people are unemployed, the gap between rich and poor widens, the national infrastructure continues to be dilapidated, budget deficit and per capita national debt increases and your representatives spends day and night, resolves nothing but legislate bad and unimplementable laws or Government shutdowns. Legislations passed by the House is modified by Senate, again modified by House and then again by Senate and the game of passing the buck goes on. Our Legislators and Senators meet too often but seldom reach on any agreement on what is good for the country and the people. It is politics for them every day.

However, despite all the shortcomings of the political system, the democratic process continues to be the available best option for public participation in Government. Therefore, voting in every election is important. It is the most important right and duty as a citizen. Express your opinion through the ballot. Your one vote may make some positive change in choosing the best alternative legislator who could do something positive for our future generation one day.

Now let us come to the runoff election in the 6th district and list out some key considerations when you press the button on the voting machine on election day. These are:

Our informed decision on 20th will determine who will represent us and whether the candidate and the political party is wisely spending our tax dollars.  Our vote should not only elect our legislator but also send a strong message that insensitivity towards citizens will not be taken lightly nor rewarded.

*About the Author: The author is a keen political observer and closely follows US and Indian politics. More Blogs at http://sabrimala.blogspot.com, Twitter: mohanMNair