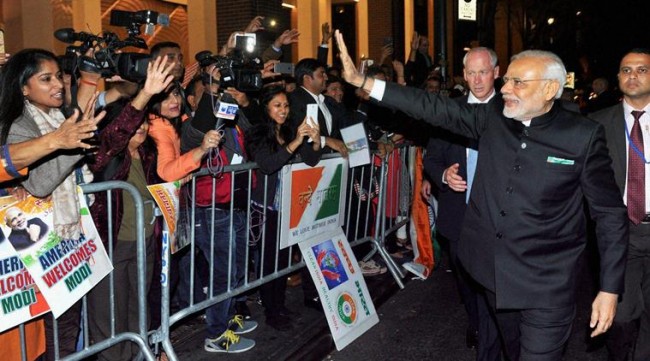 Beyond power meetings with Obama and other world leaders at the UN, as the Indian prime minister on his second odyssey to America courted big business and tech titans of Silicon Valley, he found several desi faces across the table.

Obama, who has the largest number of Indian Americans in his administration, also added MasterCard CEO Banga to his ever expanding Indian talent pool by naming him as a member of the Advisory Committee for Trade Policy and Negotiations.

As India and the US together battle the scourge of terrorism, Obama named Rashad Hussain, a Muslim of Indian heritage, as US Special Envoy and Coordinator for Strategic Counter-Terrorism Communications.

Son of immigrant parents from India, Hussain had since 2010 served as US Special Envoy to the 57-member Organisation for Islamic Cooperation (OIC) to build partnerships with Muslim communities around the world.

Again, as the White House looked for its first chief data scientist, Obama turned to Dhanurjay ‘DJ’ Patil to help shape policies and practices to help the US remain a leader in technology and innovation.

Rajiv Shah, another son of immigrant Indian parents, left the US Agency for International Development (USAID) after five years at the helm of the agency engaged in a mission of ending extreme poverty and promoting resilient, democratic societies.

Other Obama appointees included Swati A. Dandekar as US director of the Asian Development Bank, Arun Majumdar, an Indian Institute of Technology-Bombay alumnus as one of four US science envoys, and Atul Keshap as ambassador to Sri Lanka and the Maldives.

Keshap was the second person of Indian descent to be posted to the region after Richard Rahul Verma was appointed US ambassador to India, while Nisha Desai Biswal heads the State Department’s South Asia bureau.

Modi, along with Nadella, Chanda Kochhar (managing director and CEO of ICICI Bank) and Vikram Patel (co-founder of the NGO Sangath), also made it to the Time magazine’s list of the World’s 100 most influential people.

Bhagwati Agrawal was listed among CNN’s Top 10 Heroes of 2015 for bringing safe drinking water to more than 10,000 drought-stricken people in his native Rajasthan.

A New York couple, Chandrika and Ranjan Tandon, announced a $100 million gift to the New York University School of Engineering in what is believed to be the largest philanthropic gift by a member of the Indian-American community.

In the political arena, swinging against ‘hyphenated Americans’, Bobby Jindal made a historic but short-lived run for the US presidential race, while California Attorney General Kamala Harris, a “good friend” of Obama, threw her hat in the ring for the US Senate.

Renu Khator was elected chair of the Board of Directors of the American Council on Education (ACE), the major coordinating body for US colleges and universities.

But it wasn’t all hunky dory for Indian-Americans. They too had their share of bad news.

A visiting Indian grandfather was slammed to the ground by an Alabama police officer. But the offending cop went scot free with two mistrials leaving the South Asian community organisations outraged.

Terrorist attacks in Paris and California led to a rise in hate crimes against Muslims as well as Sikhs, who are often mistaken for Muslims because of their beards and turbans.

The White House teamed up with a Sikh and an Asia Pacific community group to launch a public awareness campaign to address bullying in six languages including Hindi, Punjabi and Urdu.