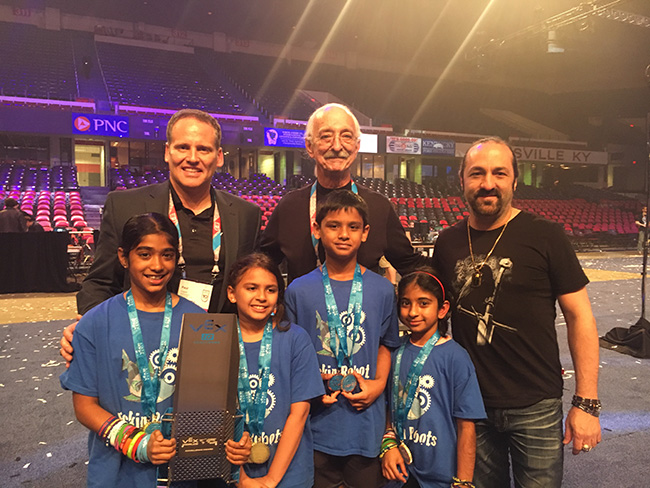 Atlanta, GA, May 31, 2017: VEX Worlds 2017, presented by the Northrop Grumman Foundation, brings together top robotics teams in the VEX Robotics Competition under one roof to compete and celebrate their accomplishments. This year’s VEX Robotics World Championship hosted 1,400 teams from over 30 nations worldwide. The week-long competition April 20-25, 2017 in Louisville, Kentucky was a celebration of STEM education, the year-long work of each student-led robotics team, and diversity in the high-tech field of competitive robotics.

Siddhanth and Eshita, after the STEM research interview, said, “We delivered the STEM presentation to show the team’s creative efforts and thought leadership in solving day to day problem using robots.”

Sanjana and Charu said, “The design of our Robot was done from ground up for each tournament level to score higher points that made it more exciting and challenging to compete at the World level, given that we were making the maiden journey into VEX World Competition.The VEX World Team Challenge Experience was great learning to strategize the win position with another team and robot that we had very little or no knowledge of.”

Prakash Bigamudra and Suhasini, parent design mentors, said, “This team has the deepest passion to progress further by resolving the technical gaps with the robot in a timely and practical manner. And the team agrees to agree and agrees to disagree – alignment is the strength of this team!!”

Sahana Saravanan and Ramesh, Team Manager and STEM Coach, said, “The team is highly self-motivated in STEM research and clearly articulate how robotic solutions can help transform the world into a better place to live.”

Off to the Ballpark!