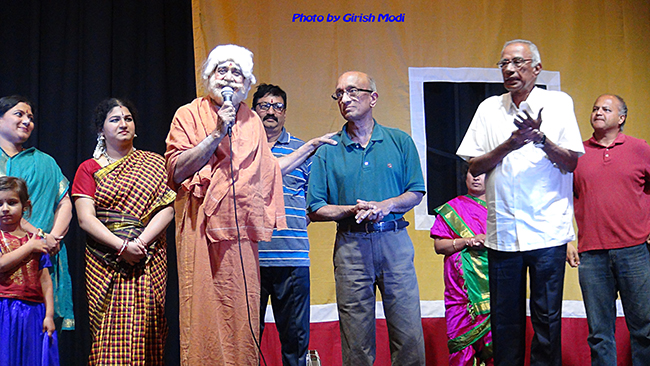 Atlanta, GA, May 31, 2017: People of Tamil Nadu last year celebrated the birth centenary of Sri Thyagaraja, who is considered the greatest composer of Carnatic music of the 17th and 18th centuries. A musical drama depicting the trials and tribulations of the saint by visionary artist TV Varadarajan is on a tour of the USA and Canada. CAMAGA organized this show on April 22nd at the Vedic Temple in Lilburn with over 400 people in attendance.

Artists included TV Varadarajan and his team of 15 members from India, along with five local drama artists. This drama has received great reviews in all media in India and USA. 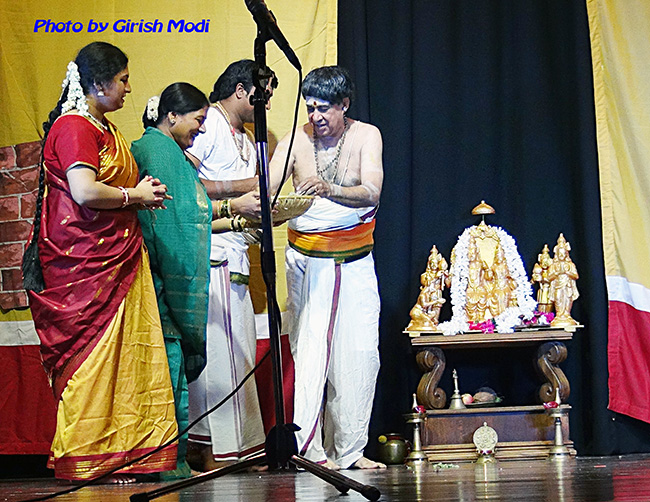 Thyagaraja is regarded as one of the “trinity” of Carnatic music composers, along with Muthuswami Dikshitar and Syama Sastri. He was a devotee of Rama.

Thyagaraja lived to the full extent that God realization is best achieved through Nadopasana (music with devotion). His songs are filled with an intimate devotion to Rama, all through revealing his deep understanding of the tenets of the Vedas and Upanishads. Sri Thyagaraja has composed about 24,000 songs in his long devoted life to Lord Rama.

This musical drama lasted for nearly 3 hours and kept the audience spellbound. TV Varadarajan, who played the role of Sri Thyagaraja, was brilliant and the audience was mesmerized to hear the soulful composition of Sri Thyagaraja, which were presented by noted Tamil classical singers Bombay Jayashri and Arun. Narration of episodes were presented in English for the non-Tamil audience. 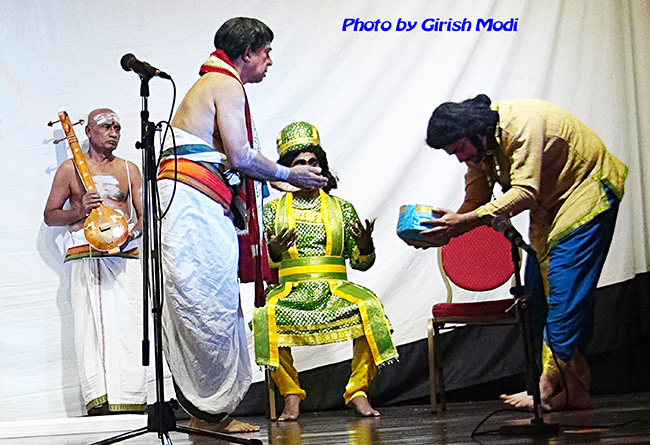 Several episodes of Thyagaraja’s life were presented and a few are highlighted here. In the first episode, Thyagaraja composed his first song on Rama, Namo Namo Raghavaya when he was only 13 years old. Sri Thyagaraja continued to recite the Rama Nama every day and had many darshans of Sri Rama, which inspired him to write songs on his beloved Lord Sri Rama. His guru, Sonti Venkataramanayya, wanted to listen to Thyagaraja’s new talent and invited him to perform at his house in Thanjavur. On that occasion, Thyagaraja presented Endaro Mahanubhavulu, the fifth of the Pancharatna Krithis.

In another episode, he sang at the request of his guru, beginning at 8 p.m. and finishing only at 4 a.m. Serfoji Maharaja heard of his performance and invited him to visit the temple to be rewarded, but Thyagaraja rejected the offer and composed another gem of a kriti Nidhi Chala Sukhama on this occasion. Angered at his rejection of the royal offer, Thyagaraja’s brother took revenge by throwing his idols of Rama in the nearby River Kavery. Thyagaraja, unable to bear the separation with his Lord, made a pilgrimage to all the major temples inSouth Indiaand composed many more songs in praise of the deities of those temples; one of these songs is this sad song Endu daagi naado, (Where has He hidden Himself?) He finally found the idols with the help of Rama himself.

In an episode, a sage named Haridas asked him to recite the name of Rama 960 million times. After doing so, Thyagaraja went to offer his prayer when he heard a knock on his door. Rama, Seeta, and Hanuman were entering his prayer room and he was blessed to see the coronation of Rama. Moved with wonder and devotion, he sang the anupallavi of the kirthis “Ela nee dayaraadhu” and “Bhavanuta”.

In another episode he visited Tripathi; but when he went to the temple, it was closed. In sadness, he sang “Teratiyagarada” and the temple officials gathered round in admiration when they saw the door opening by itself and the screen falling aside. He sang “VenkaTEsha ninu sEvimpa” in his happiness at seeing the Lord.

In the last episode, an Omkara Naadha was heard after Swami sang this kriti and a jyoti was seen to emanate from the head of Swami and travelled upward. Swami then slumped on the thanpura he was holding, and become one with the Lord.

Having composed an innumerable number of kirthans (songs) that explored all the possibilities within the rules of the Carnatic music tradition, Saint Thyagaraja’s contribution to music includes the Uthsava Sampradaya kirthans and the Divyanama kirthans. These two are examples of classical Carnatic music in their pristine purity. Saint Thyagaraja also created two musical plays. Prahlada Bhakti Vijaya, a play without Hiranya Kasipu or Narasimha, has some 48 songs and over 120 padyams. Nowka Charitha, the other play is equally fascinating and once again a creation without any basis derived from Bhagavatham. This play has 21 songs and many padyas and gadya passages.

While the bulk of the songs are in praise of Rama and a few on other deities, there are numerous songs on ethics and morals, worldly wisdom, mental control etc. The importance of these and other songs and how Sri Thyagaraja used his compositions to energize our inner spiritual forces and attain moksha in this life are discussed in the article “Nadopasana for Salvation.”

Saint Thyagaraja’s life and kirthans are the heritage of Indian culture expressed in classical Carnatic music. This heritage can be described as the eternal verities of divinity. His contribution to posterity is devotional, religious and philosophical. A true understanding of Sri Thyagaraja’s kirthans serves to deepen the purpose of our existence. The greatness of Sri Thyagaraja is the way he linked the human to the divine. The echoes of this Truth reverberate in many of his songs.

Sri Thyagaraja had made significant contributions to raga lakshana, raga lakshya, and raga swaroopa, or in general, to the development of musicology.
He used sangitas to bring out the raga bhava or their fundamental characteristics.
The compositions of Sri Thyagaraja made the largest contribution to our knowledge of Carnatic music today. In volume and variety, no other composer has given us so much material covering so wide a range of ragas, their lakshanas, that allows singing even by those with limited voice range and limited music.

Thyagaraja regarded music as a way to experience the love of God. His objective while performing music was to repeat the name of God and contemplate on His Divine Pastimes, thereby reducing the vices of the mind, not to display his mastery over Raga and Tala. He had to struggle quite a bit to compose music in which Bhava, that is, emotion, was crowned. The legend goes that Being a great devotee of Lord Rama, the only things that mattered to Thyagaraja were Music and Bhakti. Music was to him the meditation on the Primordial Sound:
“Is there a sacred path than music and bhakti?” “O Mind, salute the gods of the seven notes”. “The knowledge of music, O Mind, leads to bliss ofUnion with the Lord”.

Thyagaraja is truly regarded as the cornerstone of Carnatic music.  His tradition is kept alive by his musical disciples and their followers. To this day, a commemorative music festival called the Thyagaraja Aaradhana is held at Thiruvaiyaru in the months of January to February every year.

The artists were honored the artists at the conclusion of the play. Varadarajan then gave his personal involvement and experience of making the drama.