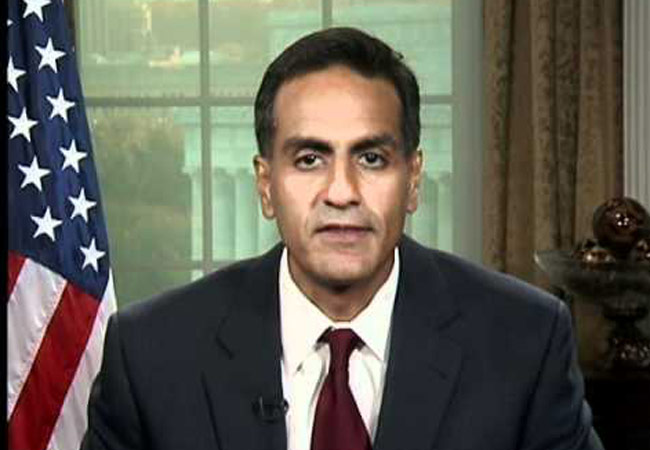 Washington, Nov 26 (IANS) The Senate Foreign Relations committee has scheduled the confirmation hearing of Indian-American Richard Rahul Verma, President Barack Obama’s nominee to be US Ambassador to India, on Dec 2.

If confirmed by the full Senate, Verma, 45, a former key aide to then secretary of state Hillary Clinton, will be the second Indian American to be put in charge of a job involving India.

The New Delhi post has been vacant since the previous ambassador Nancy Powell quit in May after India-US ties hit a low after a major diplomatic spat over the December arrest and strip search of Indian diplomat Devyani Khobragade in New York.

Verma was named as the US envoy to India just ahead of Modi’s visit to the US last September.

The scheduling of his confirmation hearing immediately after the Thanksgiving holidays is seen as an effort to see him in place before Obama’s second visit to India.

Obama has been invited by Modi to be the chief guest at the annual Republic Day parade, the first US President to have the honour. He would also be the first US chief executive to visit India twice while in office.

Currently, Verma is a senior counsellor at the Steptoe & Johnson law firm and the Albright Stonebridge Group, a business advisory company led by former secretary of state Madeleine Albright.

Verma is also a Senior National Security Fellow at the Centre for American Progress and serves on the boards of Human Rights First, the Clinton Foundation and the National Democratic Institute.

A Lehigh University graduate who received a JD from American University, and an LL.M from Georgetown University Law Centre, Verma served as assistant secretary for legislative affairs at the State Department from 2009 to 2011 under Hillary Clinton.

He was also senior national security advisor, counsel and foreign policy advisor to the Senate Majority Leader Harry Reid from 2002 to 2007, and an associate at Steptoe & Johnson from 1998 to 2002.

Verma served on active duty in the US Air Force from 1994 to 1998 and received, among other decorations, the Meritorious Service Medal and Air Force Commendation Medal. Verma also served on the Commission on the Prevention of Weapons of Mass Destruction Proliferation and Terrorism in 2008 and has been a member of the Secretary of State’s Foreign Affairs Policy Board.