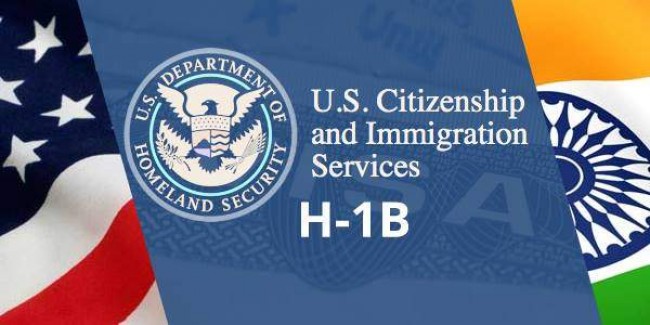 Washington, Jan 9 (IANS) Indian techies in the US can heave a sigh of relief after the Trump administration said it was not considering any regulatory change that will force H1-B visa holders to leave the country.

The announcement by the US Citizenship and Immigration Services (USCIS) came on Monday after last week’s report by US-based news agency McClatchy DC Bureau that Washington was considering new regulations to prevent the extension of H-1B visas, largely availed of by Indian IT firms.

“The USCIS is not considering a regulatory change that would force H-1B visa holders to leave the US by changing our interpretation of section 104(c) of AC-21, which provides for H-1B extensions beyond the 6 year limit,” said Jonathan Withington, chief of media relations for USCIS.

“Even if it were, such a change would not likely result in these H-1B visa holders having to leave the US because employers could request extensions in one-year increments under section 106(a)-(b) of AC21 instead,” Withington was quoted as saying by Kansas City Star.

“The agency is considering a number of policy and regulatory changes to carry out the President’s Buy American, Hire American Executive Order, including a thorough review of employment based visa programmes,” he said.

Earlier reports said the Trump administration was considering tightening H-1B visa rules that could lead to deportation of 750,000 Indians.

Withington said that USCIS was never considering such a policy change and that “any suggestion that USCIS changed its position because of pressure is absolutely false”.

Representatives Kevin Yoder, a Kansas Republican, and Tulsi Gabbard, a Democrat from Hawaii, sent a letter to Trump, obtained by McClatchy, urging him “not to deport H-1B holders awaiting permanent residency processing.”

“We strongly believe this action would be harmful to the American economy, credibility and relations with India and the Indian-American community,” wrote Yoder and Gabbard last week. Both are members of the Congressional Caucus on India and Indian Americans.

The US Chamber of Commerce had warned it would be “tremendously bad policy” to tell highly skilled people they were not welcome to stay in the US.

Indians get most of the H1-B visas, although there are no national quotas for the facility nor is it specifically designed for Indians.

Since taking office, the Trump administration has been talking about cracking down on the visa scheme.