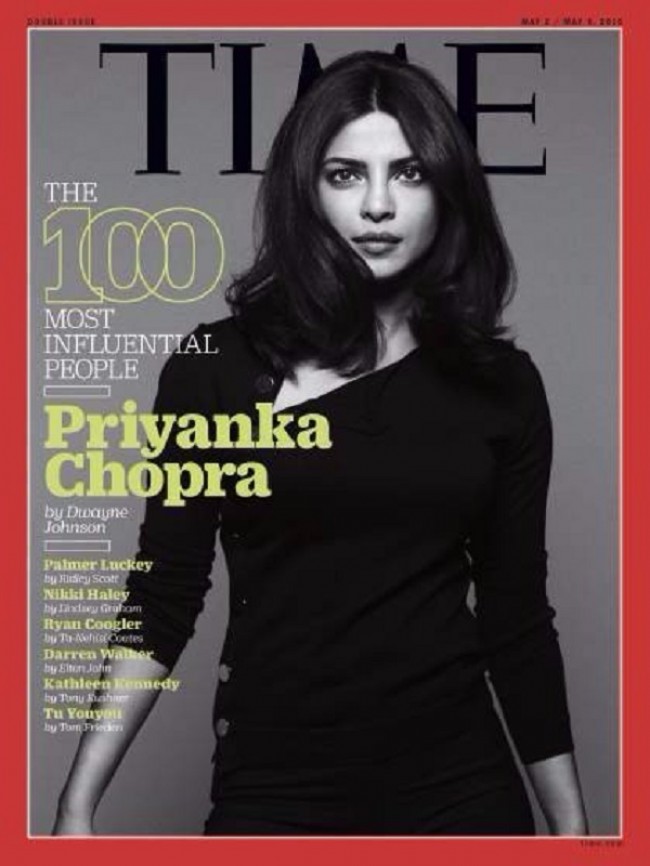 Mumbai, April 21 (IANS) Bollywood actress Priyanka Chopra has made India proud once again. Her name has been featured in Time magazine’s 100 Most Influential People in the World list alongside Oscar-winner Leonardo DiCaprio, Facebook founder and CEO Mark Zuckerberg, and singer Nicki Minaj, among others.

Priyanka, who came into the limelight in the West playing the lead role in popular American TV series “Quantico”, has also graced one of the six cover pages of the magazine.

Speaking about Priyanka, her “Baywatch” co-star Dwayne Johnson said: “Before ever meeting Priyanka Chopra, I had heard her name coming out of Bollywood and was impressed: she was beautiful, talented, had made nearly 50 movies, earned multiple awards — a massive star.

“When we connected around the time she started ‘Quantico’, we immediately hit it off. She has drive, ambition, self-respect, and she knows there’s no substitute for hard work.”

Johnson further shared that he feels himself “lucky enough” to be working with Priyanka in “Baywatch”.

“It’s an amazing time to watch as she pierces the US market. She has an ability to inspire people to do more and achieve more. When I look at her success from the 50,000 feet view and see everything that Priyanka has already done, is currently doing and has the desire and the bandwidth to do, I can see that her impact is going to be invaluable,” Johnson said.