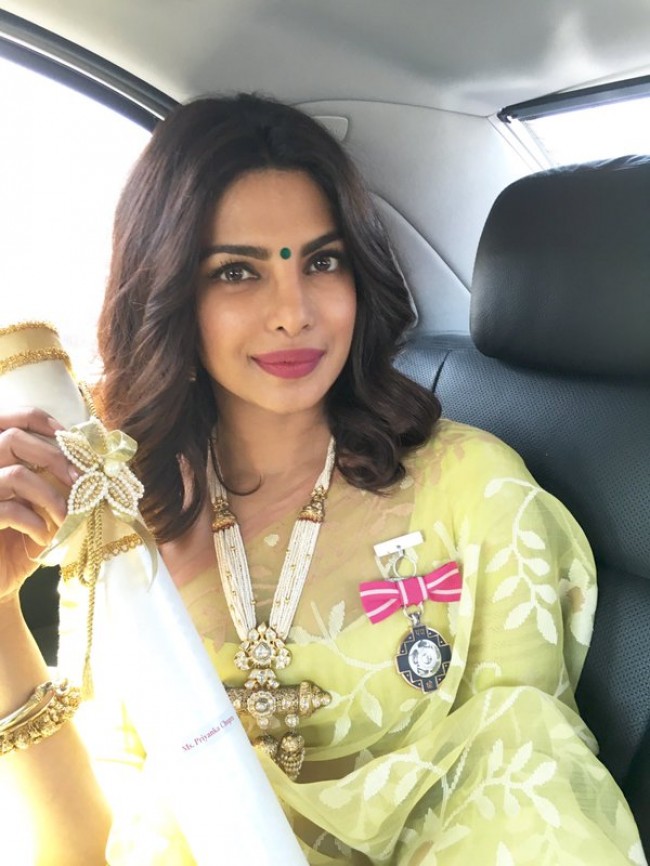 Priyanka looked no less than a “Desi” girl, dressed in a lime green sari while receiving the honor.

Asked even though she has created waves internationally, how much importance does an Indian award is for her, Priyanka told IANS: “Very important…First of all being from a defence family, this means a lot. My father would have been very proud. Getting an acknowledgement for my job is an another feeling all together…It’s an incredible feeling.”
The “Bajirao Mastani” actress is currently busy with “Quantico” and her first Hollywood film “Baywatch” with actors Dwayne Johnson and Efron.
Priyanka says she has left days of shooting for coming back to India, and also praised her the international team for understanding the importance the award is for her.
“Two days of shooting were put on hold to come here. Now the entire cast will work on Saturday because I had to come here. They (international team) never work on weekends, but they understood how important it was for me,” she said.

The former Miss World ventured into Hindi cinema in 2003 with the film “The Hero: Love Story of a Spy” and has made India proud globally with her role of FBI agent Alex Parrish in “Quantico”.

The actress, who is currently riding high on the success of Sanjay Leela Bhansali’s magnum opus “Bajirao Mastani”, has even bagged a Hollwood film, “Baywatch”, alongside Dwayne Johnson and Zac Efron.

My success belongs to me, nobody else: Priyanka Chopra