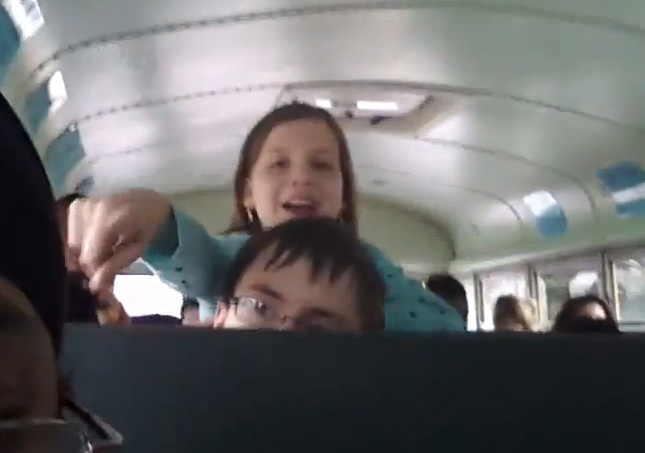 New York, March 2:  A shocking video of a bunch of school kids bullying a Sikh boy in Duluth, Georgia was uploaded on YouTube and is going viral.

The video, which was uploaded on Sunday by a user named “Nagra Nagra”, claims that the Sikh boy being bullied is named Harsukh Singh and is a student at the Chattahoochee Elementary School in Duluth, Georgia, The Inquisitr news portal reported.

The video, which was originally uploaded by Harsukh, has been now made private. The video that is now going viral has been downloaded and re-uploaded by another user.

In the video, Harsukh remains very calm and composed, even as his schoolmates continue taunting him.

At one point though, he does abuse them.

One of the kids is also heard threatening Harsukh when he figures that their act is being recorded. A girl on the bus is seen yelling “Terrorist! Terrorist!” at the boy.

The uploader claims that Harsukh had initially uploaded the video with the following description: “Kids being racist to me and calling me an Afghan terrorist. Please don’t act like this towards people like me. If you don’t know, I’m not Muslim, I’m Sikh.”

Japjee Singh, an activist at The Sikh Coalition posted this comment on his facebook page: “It has come to the attention of the Sikh community after this video, produced by the victim himself of an incident on the bus where students were yelling, “terrorist, terrorist.” Personally knowing this person, it is courageous of him to stand up to his aggressors. This exemplifies that bullying continues in our Metro-Atlanta school districts, and it is just not Anti-Sikh bullying. The fight against bullying continues that these actions must be justified, and these young minds whom are barely in middle school need to understand the importance of one’s rights and what is really discrimination. There is a lot more work to be done, and students to be reached. It is not just the students, most of this comes from their parents’ views and exposure!”

The Executive Director of Communication and Media Relations for Gwinnett County Public Schools, Sloan Roach, released this statement: “District officials were notified about this video today. We have begun an investigation into this matter. The first order of business is identifying the students involved.  The students involved appear to be middle school aged. Based on the findings of the investigation, we will take appropriate disciplinary action.”

Is Ajit Jain in two-man race to succeed Warren Buffett?