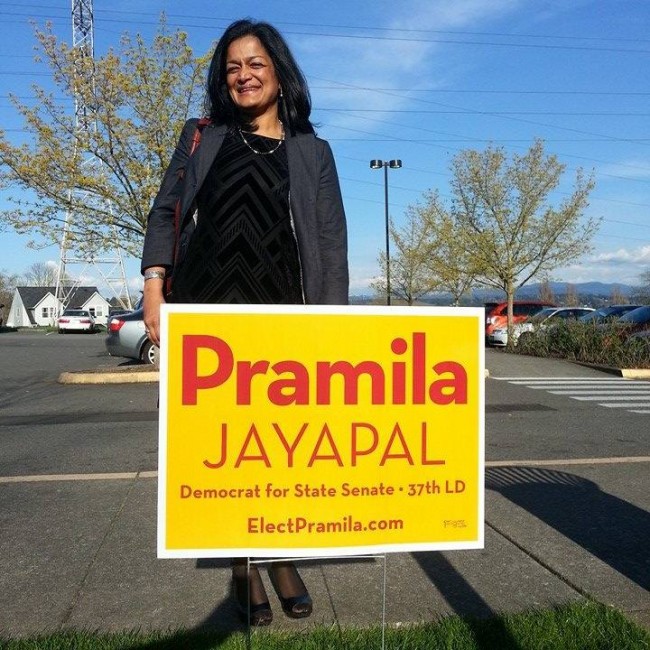 On her twitter profile, Jayapal calls herself an unapologetic activist for justice. She will face college teacher and activist Louis Watanabe in November.

Jayapal was named the White House Champion for Change in 2013. She is already spoken of as a successor to 9th District U.S. Rep. Adam Smith, if Smith is tapped for a Cabinet post — possibly Secretary of Defense — in a future Hillary Clinton administration, reports seattlepi.com.

Born in India, Pramila came to the U.S.for college by herself when she was 16 years old, says her profile on her website.  She earned an MBA from the KelloggSchoolat NorthwesternUniversity, and a BA from GeorgetownUniversity.  She is the author of a book, Pilgrimage: One Woman’s Return to a Changing India, and many articles in varied publications including The Nation, Politico, Reuters.com, The Seattle Times, and Crosscut. She loves traveling the world, exploring the pristine Northwest outdoors, and reading just about anything.

Pramila lives in ColumbiaCitywith her husband Steve, her son Janak, a junior in the SeattlePublic Schools, and their dog, Otis. She’s been a community leader with deep roots in South Seattle, living and working in the 37th Legislative District for almost twenty years.