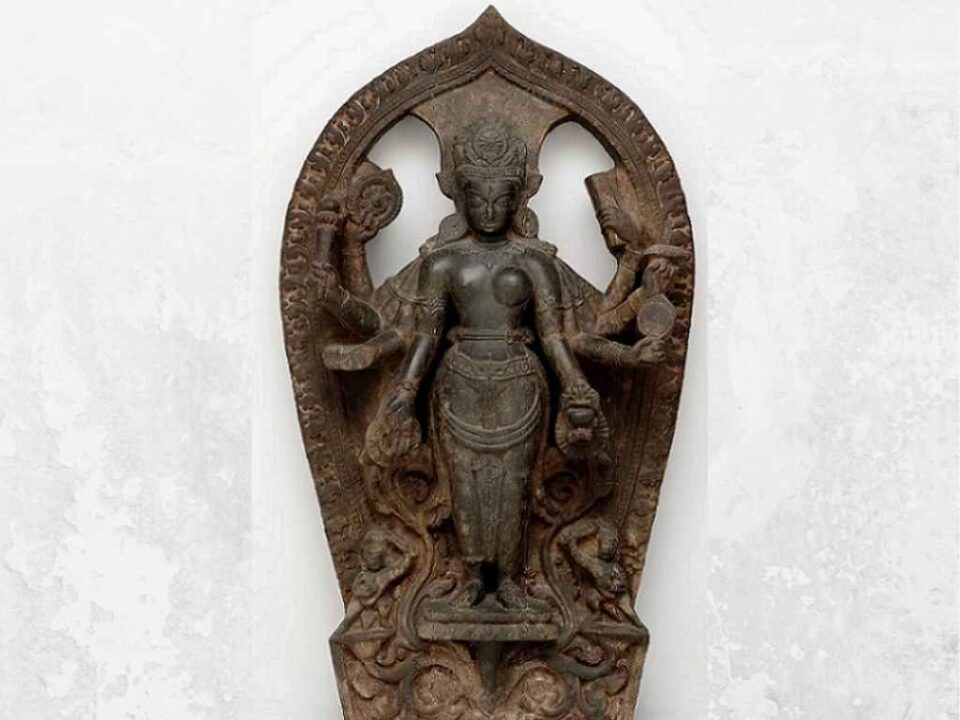 New Delhi , March 11, 2021: Thirty-seven years after it was stolen and subsequently landed in the US, a stone stele of Lakshmi-Narayan, depicting the Hindu deities of Lord Vishnu and Goddess Lakshmi, is finally returning to its original home in Patan, a city located just across the Bagmati river from Kathmandu, the capital of Nepal.

Last week, Yuba Raj Khatiwada, the Ambassador of Nepal in Washington, received the statue of Vasudeva-Kamalaja (also known as Lakshmi-Narayan) handed over from the representative of the US Government Timothy Dunham, Deputy Assistant Director, Federal Bureau of Investigation (FBI), in a ceremony organized at the Nepalese embassy.

The statue was reported stolen from Narayan temple in Patan, Lalitpur district of Nepal, in 1984 and was illegally transported to the US in the late 80s.

The historical artifact had since 1990 been on display at the Dallas Museum of Arts in Texas, one of the largest art museums in America.

The museum said that the 10th/11th-century stele was previously on loan from a private collection soon after it was auctioned at Sotheby’s in New York and now, with the full support of the object’s lender, is being transferred to its original owners.

Kathmandu to Dallas via New York and back

How the stele ended up at the Dallas Museum of Art remains a long story, good enough to be converted into a mystery novel some day, as lakhs of devout Hindus back home in the Kathmandu valley worshipped a replica for decades.

While the mention of the theft has been documented in Krishna Deva’s ‘Images of Nepal’ (1984) and ‘Stolen Images of Nepal’, a book written by Lain Singh Bangdel in 1989, it was only in November 2019 that new information became available concerning the provenance of the stele.

In a series of tweets last November, Erin Thompson, an Art Crime professor at New York’s John Jay College of Criminal Justice, detailed how artist Joy Lynn Davis, who paints photorealistic images of stolen deities from Nepal, did an image search of the Lakshmi-Narayana after it was highlighted by Nepali writer and activist Kanak Mani Dixit as one that meant the most to him.

While Nepal had banned the export of historic statues of deities through its Ancient Monuments Preservation Act of 1956, it is estimated that thousands of Nepalese antiquities have been plundered and sold in a multibillion-dollar global black market since the country opened its borders to tourists the same year.

“This art soon began to disappear from Nepal ï¿½ first small pieces, like ritual paraphernalia, then free-standing, bronze statues of deities. Finally, even difficult-to-transport stone sculptures became worth the while of thieves and smugglers,” Thompson wrote in an article for Brooklyn-based art forum Hyperallergic in January.

“Dixit had discovered that the statue had been auctioned at Sotheby’s New York on March 22, 1990 (Sale 5987: Indian, Himalayan and Southeast Asian Art, lot 278), but he didn’t know where it had gone from there. We now know that same year, Osley lend it to the Dallas Art Museum. It was displayed there as a long-term loan for nearly 30 years.”

The statue was removed from view by the Dallas museum authorities in December after Thompson’s twitter post. With the lender’s support, the museum contacted officials at the Nepalese Embassy, who provided provenance information on the stele. The museum authorities and the lender were subsequently contacted by the Federal Bureau of Investigation (FBI) and worked cooperatively and responsibly to reach a mutual resolution and effectuate the transfer of this important object to Nepal. Damador Gautam, the current Director General of Nepal’s Department of Archaeology, also swung into action to bring back the artefact to its original place.

“The Dallas Museum of Art is committed to responsible stewardship of the objects in our care and rigorous provenance standards.” As soon as we?became?aware of?additional?information on the stele, we began?working with the lender and with the Embassy of Nepal to determine an ethical and appropriate course of action,” said Agustin Arteaga, the Eugene McDermott Director of the museum.

On March 2, officials from the Dallas FBI Field Office and the Dallas Museum of Art transported the stele of Lakshmi-Narayan to Washington and then returned to Nepali custody on March 5.

Carved in gray stone, the stele depicts Lord Vishnu and Goddess Lakshmi in a dual form, bearing attributes and holding symbolic objects that identify both gods. Lord Vishnu’s mace and discus are held in the figure’s two upper, proper right hands, and the conch and lotus in the lower hands. Goddess Lakshmi’s left hands hold a mirror and a container of jewels. The stele measures 33.5x 19.25 inches approximately and probably dates to the 10th or 11th century.

“Along with the FBI’s Art Crime Team, the Dallas FBI is grateful for the Dallas Museum of Art’s determination to assist in the safe return of the Stele of Lakshmi-Narayana to the Government of Nepal. The FBI has developed significant relationships with our foreign partners that are committed to the protection of cultural property,” said FBI Dallas Special Agent in Charge Matthew DeSarno.

The cooperation on the restoration of the artifact took place within the framework of the 1970 UNESCO Convention on the means of prohibiting and preventing the illicit import, export and transfer of ownership of cultural property.

As per the Nepal embassy, the statue will be transported to Kathmandu in due course and installed at appropriate place.

However, as the ancient stele starts its journey back home, an uncertain fate awaits thousands of such artefacts.

As Thompson stated in her interview with Texas art magazine Glasstire: “My larger concern is that there could be so many more sacred sculptures stolen from Nepal, or antiquities in American Museums where we don’t happen to have this clear of evidence of theft. And we need to as museums do better in trying to figure out where the objects come from.”

Kamala Harris to participate in Quad summit with Modi

US probes reports of Sikh turbans being confiscated at Mexico border