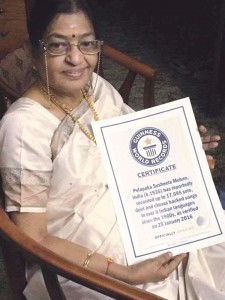 In an official certificate presented by Guinness it was verified that she has sung 17,695 solo, duet and chorus backed songs as on January 28, 2016.

With an illustrious career lasting over five decades, Susheela has over 30,000 songs to her credit across multiple languages.

In Telugu alone, she has sung close to 20,000 songs, followed by around 10,000 songs in Tamil, besides many more in other languages.

Having made her singing debut in 1952 Tamil film “Petra Thai”, she went on to croon in several classics such as “Missamma”, “Savaale Samaali”, “Siri Siri Muvva” and “Meghasandesham”.

She has five National Awards to her credit, besides the coveted Padma Bhushan honour, which was presented to her in 2008.

Simone Ashley loves how her Bridgerton character breaks the rules