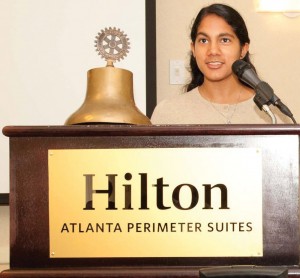 SARAYU NARAYAN is a sophomore at Chamblee High School. This essay won the North Atlanta Rotary Club’s ‘Laws of Life’ essay competition in 2013.

“In moments of surprise we catch at least a glimpse of the joy to which gratefulness opens the door.”
― David Steindl-Rast

Walking through magnificent arches and huge glass rooms gleaming with the rays of sunlight shining upon them, I gazed at the heavenly gardens and flowing fountains that surrounded me on either side. Pondering to myself, I developed a sense of satisfaction for the choice of hotel, as I was now staying at the grand Taj Palace Hotel, in Mumbai, India. I continued walking for a while, lost in my own reverie, as I suddenly snapped back to reality, drawn aback by the enormous contrast in my surroundings. I had left a glorious hotel behind me, where everything from the decorative curtains to the magnificent swimming pool was carefully tuned to perfection, and now I was facing a noisy and polluted road, filled with masses of people hurriedly shoving their way past each other – the typical atmosphere in India.

Intrigued by my surroundings, I darted across the street to view the scene of India, and approached a smiling peanut vendor, sitting on a hand-woven mat in front of the famous Gateway of India. As I observed him more closely, I began to wonder where all his joy was coming from, as he was wearing only a stained dhoti and a rather ragged-looking shirt. Suddenly interrupting my train of thoughts, the vendor enthusiastically called to me, asking if I wanted any peanuts. Feeling slightly sorry, I bought a portion, and began to carry on a conversation with him, only to find that he was extremely open and seemingly tireless, despite his long hours of work in the blazing Mumbai sun. He had been selling peanuts for nearly ten years now, with only his and his wife’s small incomes to support their daughter’s college expenses. Thoroughly impressed by his rare and grateful attitude toward his life, I listened on to hear him explain in his broken-up English, “Madam, two years back, I get 50 rupees per day, now 100 rupees daily, I better. My daughter go to good English school, she become doctor. My karma different, her karma different, both lucky only. Life mean good if you see it good, life mean bad if you see it bad.”

That day, I finally understood the immense value of perception and gratefulness. There I was, standing in front of a poverty-stricken peanut vendor, who worked hard from sunrise to sunset on the harsh roads of India. He held no remorse in him for the quality of his life, nor jealousy for the high-paying jobs and comfortable lives that many others seemed to have. However, for all that satisfaction that one peanut vendor held buried inside him, there was a world full of people who could easily diminish his powerful insight. And back in the resplendent and expensive Taj Palace hotel, that only the most fortunate could afford, there were hundreds of people who would gladly enlighten you on all the reasons for which their life was not good enough, me having been one. However, that one stunning experience altered my perception of this world completely.

Every sunrise, we awaken to the dawn of yet another beautiful day of life, looming with countless opportunities and packages of happiness waiting to be opened. But, through our eyes, we often perceive our lives as mere hours to be passed, and our minds fill with dissatisfaction and greed, as we thoughtlessly discount that which we already have, and deeply concentrate on all that we do not. It is an endless search however, to base satisfaction on the fulfillment of our wants, as one can never truly find happiness when there is such an abundance of things to set ones’ eyes upon. To open the door of joy, we must alter our perceptions of the world, and quench our desires for more through our very own gratefulness and satisfaction.

[…] BY SARAYU NARAYAN. “In moments of surprise we catch at least a glimpse of the joy to which gratefulness opens the door.” ― David Steindl-Rast. Walking through magnificent arches and huge glass rooms gleaming with …  […]

[…] BY SARAYU NARAYAN. “In moments of surprise we catch at least a glimpse of the joy to which gratefulness opens the door.” ― David Steindl-Rast. Walking through magnificent arches and huge glass rooms gleaming with …  […]