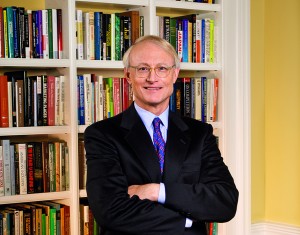 New Delhi, Feb 12 (IANS) A multi-disciplinary brains trust is being co-created for India by noted Harvard professor Michael E. Porter with a mission to replicate the US structure and enhance India’s prosperity, according to sources privy to the development.

“We will reincarnate this bold structure consistent with India’s unique requirements,” Professor Amit Kapoor, president and chief executive-designate of the Indian Council on Competitiveness, told this IANS columnist.

In recent months, Porter has led a high-visibility campaign in the US for mending that country’s fault lines. These, the Bishop William Lawrence University Professor has argued, can’t be attributed merely to economic downturn.

The points flagged by him and co-author Jan Rivkin include:

– Ease the immigration of highly skilled individuals, starting with (but not restricted to) international graduates of US universities.

– Rewrite the corporate tax code with lower statutory rates and no loopholes.

– Create an international taxation system for multinational companies that taxes overseas profits only where they are earned, without additional taxes on profits repatriated to the US.

– Aggressively use established international institutions to address distortions and abuses in the international trading system that disadvantage the US.

– Streamline regulations affecting business by focusing on outcomes while simplifying reporting and compliance, reducing delays, and minimizing the need for litigation.

– Enact a multi-year programme to improve logistics, communications and energy infrastructure. – Agree on a federal regulatory and reporting framework to guide the responsible development of newly accessible American gas and oil reserves

– Create a sustainable federal budget through a combination of revenue increases (including reducing deductions) and less spending (through efficiencies in entitlement programs and revised spending priorities), embodying a compromise such as Simpson-Bowles or Rivlin- Domenici.

On his part, HBS dean of Indian origin Nitin Nohria has pitched in with a “US Competitiveness Project”. The work included two surveys titled “Competitiveness at a Crossroads” with the latest version involving nearly 7,000 alumni and over 1,000 members of the general public, illuminating actions that business leaders and policymakers can take to improve US competitiveness.

After HBS’ evangelism, the US political spectrum, business leaders and the public have been urging President Barak Obama and the Congress to put the federal budget on a sustainable path, reform the corporate tax code, improve America’s infrastructure, address distortions of the international trading system, and craft a responsible framework for developing new energy sources.

The US Council on Competitiveness is a non-partisan, non-governmental organization, comprising of peer corporate CEOs, university presidents, labor leaders and national laboratory directors.

It works to set an action agenda to drive US competitiveness, while striving to offer innovative public policy solutions such as ensuring lower cost, easy access to high quality education and training for all Americans. It also aims at maintaining long-term federal investments in science and technology leadership, as also reformation and simplification of the tax code to stimulate investment and attract global capital to the US.

The council’s target over the next 10 years is to help create at least 21 million jobs, cut unemployment to under 5 percent, prune government debt by $4 trillion to ensure America’s long term solvency, invest $2.2 trillion in infrastructure to maintain competitive advantage, and double exports.

Charles O. Holliday, Jr, the chairman of Bank of America, is its chairman emeritus.

Deborah L. Wince-Smith, president and chief executive of the US Council said: “The Indian body will be committed to addressing the issues pertaining to India’s competitiveness in a multidisciplinary manner.”