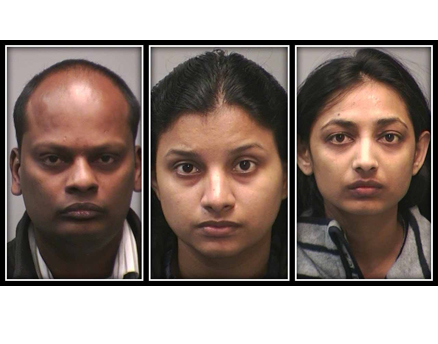 New York, Jan 31 (IANS & Sources) The parents of a 19-month-old boy in the US state of Connecticut, who died from head injuries after his babysitter allegedly slammed him to the floor, have been arrested.

The parents, Thenmozhi Rajendran, 24, and Sivakumar Mani, 33, of New Haven, were charged with risk of injury to a child and interfering with police, the Hartford Courant newspaper reported Thursday.

Police, however, said the baby sitter Kinjal Patel, who was arrested and charged with manslaughter last week, is the prime suspect.

Her bail was set at $1 million.

Mani Sivakumar, 33, and Thenmozhi Rajendran, 24, Athiyan’s parents, were arrested Jan. 30, allegedly for interfering with police at the scene of the crime and risking additional injury to their son, who was alive but in critical condition when police arrived at the crime scene. Sivakumar and Rajendran were arraigned Jan. 30 and each posted bail of $25,000.
New Haven Police Department spokesman David Hartman told India-West that Rajendran had made several inconsistent statements to police during their investigation of Patel.
Patel, 27, earlier allegedly told police that she got angry with the baby and forced him to the floor at her home in New Haven city, injuring his skull Jan 16.
Here’s what the police affidavits report:
The parents brought the boy to Yale-New Haven Hospital on Jan. 16, saying he was having trouble breathing and couldn’t open his eyes. He was in critical condition, his skull fractured, his brain bleeding internally. He was declared dead at the hospital that Sunday.
The mother originally told police she was home with the baby, that she doesn’t work outside the house. She said she was with the baby on Jan. 16 when “she heard [him] breathing abnormally and his eyes were closed.” She called her husband at work, she said; he came home, and they drove the baby to the hospital. The father told police the same story.
A day later, detectives learned from an investigator with the state Department of Children and Families (DCF) that she had been looking at the family’s situation prior to the Jan. 16 incident. The child had shown up at the hospital the day before Christmas with “a cut inside of his lip, tongue, and a bruise to his chin.” The hospital contacted DCF; the DCF investgation discovered that a babysitter had been watching Athiyan the day he suffered the lip injury.
Meanwhile, Detectives Colon and Lucille Roche interviewed the boy’s mother on Jan. 17. She gave this description of what happened on the afternoon of Jan. 16: While her son was napping, around 2 p.m., she could hear, from the kitchen, that he made “unusual noises during his sleep. [She] went to the bedroom and picked the victim up from his crib and began calling his name trying to get him to respond. [She] said her son’s breathing was abnormal and his eyes were closed.”
Then she changed her story. She “stated the victim was standing on the arm of the couch in the living room when he was reaching for the door knob of the front door. The victim fell onto the ground and started crying. She picked him up and cradled him to sleep. She rubbed his head and felt a bump on his head. The victim slept for approximately two hours when she heard him breathing abnormally.” She said didn’t “have that much knowledge about calling 911 so she called her husband.”
In the interview, the mom stated she had not left the boy with a babysitter since Dec. 24.
The father, in a separate interview, told the detectives he hadn’t asked his wife “what happened. When they were at the hospital, his wife told him that the victim might have fallen off the couch.”
The detectives then learned that the mother does work outside the house—at a suburban Krauszer’s market. They verified with the market manager that she had been at work the afternoon of Jan. 16.
Next, the detectives went to interview the babysitter, who is of Indian descent, like the family. And like Colon. The babysitter speaks only Hindi. So Colon interviewed her in Hindi.
The babysitter said she hadn’t babysat the child again since the Dec. 24 incident, in which, the babysitter said, the boy “fell off of his toy car and fell over.”
A day later, the detectives met with the babysitter again. She changed her story. She “admitted that she used to watch the victim at least four-five times a week since August of 2013,” in the afternoons. The parents would drop the baby off at her house. She said the boy had been sleeping at her house on Jan. 16, then suddenly woke up around 5 p.m. and started shaking.”
“During the course of this interview, [the babysitter] admitted to lying to us about the victim being asleep,” Colon wrote. She “changed her story and stated that she was in the kitchen area when the victim followed her there. She was washing dishes at which time the water from the sink leaked onto the floor. The victim slipped on the floor and fell backwards. [The babysitter] stated she picked him up and brought him into the living room. She stated the victim was crying uncontrollably and his body was convulsing.”
The stories still weren’t adding up. The babysitter agreed to a third interview, on Jan. 24. This time she “admitted[ed] to causing the injuries” on Jan. 16. She “stated the victim’s father told her not to tell anyone about her babysitting the victim.” She also admitted lying to DCF. “She did not want the victim’s father to get in trouble so she lied to the police as well.”
It turned out the parents had previously signed a “safety agreement” with DCF promising not to leave the baby in the care of the babysitter, given the Dec. 24 injuries. The parents promised to look for a licensed day care center.
The parents appeared in Superior Court Wednesday before Judge Maureen Keegan, then were released after posting $25,000 bonds. The babysitter is being held on felony manslaughter and risk of injury charges on a $1 million bond. She has not yet entered a plea; her next scheduled court date is on Feb. 11.
previous post

'One By Two'- Slice of urban life, done up in tasteful shades