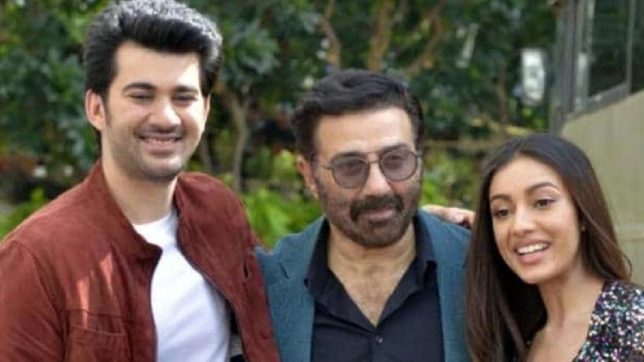 There is much that’s beautiful in Sunny Deol’s debut film for his son, the handsome and earnest Karan Deol. Scenic Manali, for one. The cinematographers Himman Dhameja and Ragul Dharuman love the landscape. The camera captures the natural unspoilt beauty of Manali and Himachal Pradesh as the relationship between Karan (Deol) a local adventure-sports guide and a visiting tourist Saher (Sahher Bammba) develops.

Their relationships grows. The narrative doesn’t. The first half, though marked by some excellent shots of the couple climbing down valleys. Wading through crystal waters and going up rocky mountains, is struck by a chronic case of inertia.

Nothing happens. Except that we see the young couple bicker and flirt. Oh yes, somewhere in the midst of this meet-cute boredom Saher bursts into the classic Kishore Kumar song ‘Pal pal dil ke paas’. It is the only reference to the film’s title. Come to think of it, the film could have been titled Pal Pal Hill Ke Paas, because that’s where the plot remains, unmoved unmoving, till midpoint when in a cloudburst of characters the screen is flooded with screaming shouting grandmoms, aunts, nephews, nieces, not to forget a hammy rick spoilt suitor (Akaash Ahuja) who can’t take rejection.

Makes you grateful that the hero is an orphan. Karan Deol is quite sincere in playing the orphaned mountaineer. His love for rugged sports is well utilised by director Sunny Deol in the first half. The second half sees young Karan partying and fighting. And in a rage-filled climax he bashes up not only the villain but his entire family.

No dhai kilo ka haath, this. But he plans to get there.

Sunny Deol’s writers (Jaspinder Singh Bath and Ravi Shankaran) try to update the mothballed material with references to whatsapp messages and viral videos. But the effort seems halfhearted and the film remains trapped in a time warp, singing a song that lovers stopped humming ages ago.

To their credit the young newcomers seem to believe in the material offered to them in the name of love. They try to make a credible couple. Some of the supporting cast specially Sachin Khedekar as Saher’s beleaguered father and Meghna Malik as a scheming politician, are excellent.

But where-oh-where is the heart in this heartbreakingly bare plot? There is so much that Sunny Deol could have done to ensure a smooth debut for his son. Instead, he ensnares the film in cliches, and finally leaves us with an over-long film that is gasping for breath after having run itself frantically into a corner.