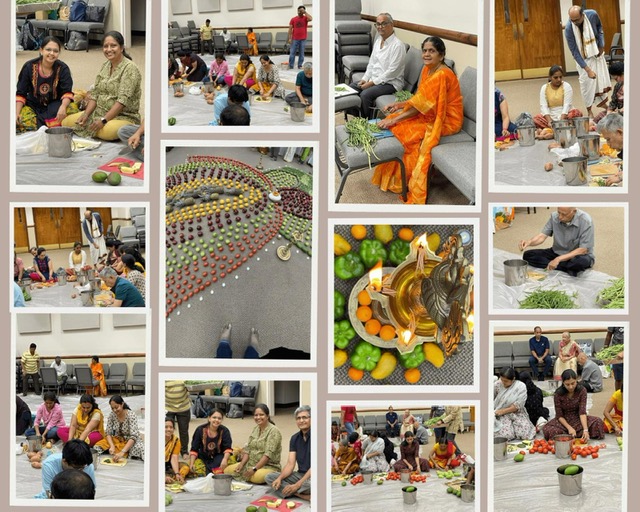 At the event, it was announced that the SKV had procured land and started the process towards the construction of a permanent temple in the Atlanta area.

Shri Raghavendra Swami is a 16th century saint and a prominent guru of the lineage of Madhwacharya. Each year, the day he entered Jeeva Samadhi (Brindavana) at Mantralayam and believed to live in a metaphysical form for 700 years, is observed as Raghavendra Aaradhane.

Legend has it that Raghavendra Swami chose to enter Brindavana during Shravana Masa,Krishnapaksha in 1671 A.D, amidst a congregation of disciples, followers, and doubters who had gathered to witness the miracle. He is said to have performed countless miracles with his Yoga Siddhi before and after entering Brindavana to display the greatness of God. The first miracle, after entering Brindavana is said to be the seven aksharas he provided that completed his disciple Appanacharya’s Poornabodha Guru Stotra, which were left incomplete by him, overcome by grief that he could not see Raghavendra Swami before entering the Brindavana.

Generally, Aaradhana is a three-day celebration, the first day known as Purva Aradhane, the second day, Madhya Aradhane and the third, Uttara Aradhane.

Priest Jaya prasad Achar performed the Aaradhane rituals, starting with the Tarkari Shastra, which was held the evening before the day-long event.

Tarakari shastra is a unique ritual (specifically Udipi and surrounding areas) performed the prior day to a major function to seek the blessings of gods who preside over the items, ingredients and process of cooking. One specific outcome is to estimate the number of people who are expected to partake in food the next day. This is performed through a unique South Indian process where the raw banana is cut in a specific way and immersed into water. The number of white side (inside part) facing up with a multiplication factor provides an estimate of expected number of people.

“With the blessings of Udupi Sri Krishna, Mukhya Praana (Hanuman), Shri Guru Raghavendra Swamy and with the guidance of Shri Shri Shri Sugunendra Teertha Swamiji, the 351st Aaradhana of Guru Raghavendra Swamy brought blessings of the Guru to all devotees who attended. Since March 2018, we have continued to spread the message of Puttige Matha in the southeast and gained immense follower ship which is growing every year,” Ajay Madwesh, devotee and pne of the organizers of the event, said.