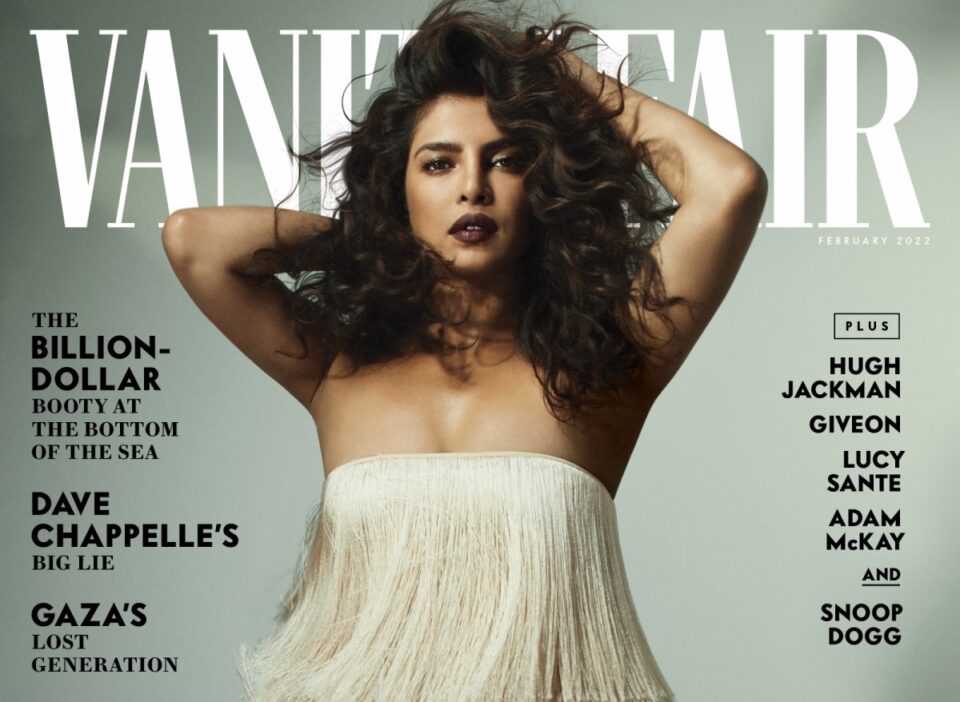 New York, Jan 13 (IANS) Priyanka Chopra has achieved what every star anywhere in the world aspires for — to be on the cover of ‘Vanity Fair’. She’s on the cover of the February 2022 edition of the magazine celebrated internationally as much for its in-depth articles as for its cutting-edge photography.

Unveiling the cover, ‘Vanity Fair’ tweeted: “After a journey into ‘The Matrix’, the actor enters 2022 with her cup overflowing –reflecting on her storied Hindi film industry career, marriage, and creating a path for herself in Hollywood.” Looking artfully messy, a sultry Priyanka appears on the cover in an off-shoulder, off-white ruffled dress from Fendi.

The magazine, previously edited by celebrity journalists such as Tina Brown and Graydon Carter (who’s played by Jeff Bridges in the film ‘How to Lose Friends and Alienate People’), is now helmed by Radhika Jones, an Indian American.

Describing her as “a driven woman who has transcended what’s previously been possible for an Indian actor in Hollywood,” the ‘Vanity Fair’ cover story goes on to say: “She is an outsider who broke down barriers and built a place for herself within the walls of Hollywood. Now she’s on a mission to welcome others in.”

Priyanka, notes the article that traces her life’s story from her days at the Army Public School, Bareilly, will finally be playing lead film roles as she had in India” with the rom-com ‘Text for You’ and Amazon’s ambitious spy series ‘Citadel’ later this year.

And about her own story, especially her rise to stardom in Hollywood, Priyanka says: “It’s taken a lot of pavement pounding to be able to get people’s attention, and to be able to get an acceptance of the fact that someone like me can be the lead of a Hollywood feature.”

She adds (and the sentiment will go down well back home): “There’s very few of us from South Asia who get to do that. I hope that the part that I play in it will sort of push the envelope a little bit.”