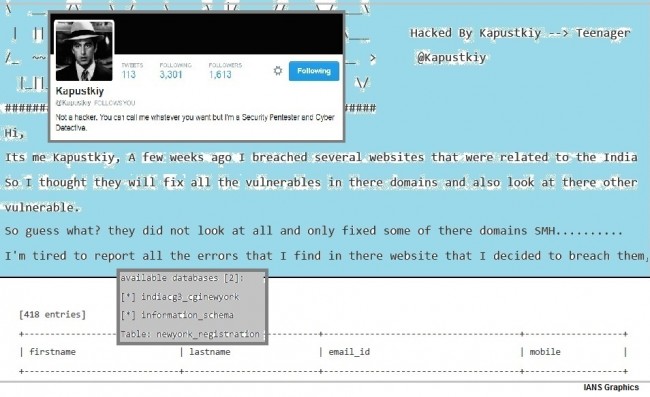 New York, Nov 16 (IANS) An Indian External Affairs Ministry official has thanked a 17-year-old hacker who exposed flaws in Indian diplomatic missions’ web sites that allowed intruders to gain access to non-public information, and said the problems were being fixed.

“Thank you for your advice,” Sanjay Kumar Verma, Joint Secretary, eGovernance and Information Technology wrote to the hacker who uses the identity, Kapustkiy. “We are fixing codes one by one.”

“Your help in probing websites of various Indian embassies is a great help,” he added.

Kapustkiy, who posted Verma’s message to him on his Twitter account and copied to an IANS correspondent, has broken into web sites of Indian diplomatic missions in eight countries.

Meanwhile, the Indian Consulate here said that its web site was being secured. Kapustkiy had posted on a web site some personal information of 418 people registered with the mission, that he said he got by intruding into its web site.

“The consulate has taken immediate action to secure the contents of its website,” L. T. Ngaihte, the head of chancery, said in a note to IANS.

In addition to the New York consulate, Kapustkiy had broken into web sites of Indian diplomatic missions in South Africa, Libya, Malawi, Mali, Italy, Switzerland and Romania and put some information he had taken from there on pastebin.com, which is open for public posting of information.

Kapustkiy, who said he is a student in Tokyo, asserted, “It took me only three seconds to gain access to their database.”

He said that his intentions in carrying out the hack were good and that he did not consider himself a hacker.

“I didn’t want to do any damage but to let administrators to pay attention (to the vulnerabilities),” Kapustkiy told IANS in an interview conducted on Twitter messaging.

He said that he decided to post some information on pastebin.com because he did not get a response from web site administrators when he pointed out the flaws.

“While we appreciate your help, please do not post the details on Paste Bin,” Verma wrote to him.

Verma’s response was in reply to Kapustkyi’s email with suggestions on fixing the security flaws. He used ProtonMail, a secure service that operates under the strict Swiss laws that protect the identity of users and the communications.